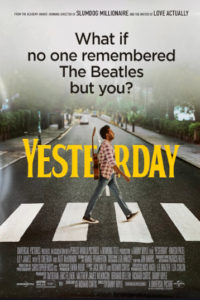 Yesterday, I saw Yesterday, famed British director Danny Boyle’s 2019 romantic fantasy comedy about a fellow who wakes up in a world where he is the only person who knows the music of the Beatles.

Yesterday wasn’t the best film I’ve seen this week. That accolade would belong to the 2019 German film System Crasher (aka Systemsprenger) with an honorable mention going to the latest delightful Aardman Animation outing: Farmageddon. (Both System Crasher and Farmageddon are on Netflix.)

Third place is not bad given the stiff competition. And Yesterday has one thing going in its favor (okay, one thing in addition to the great soundtrack and fine acting by all the leads): it got me thinking more than any other film I saw this week.

Thinking how, exactly? Well, two things. First, there is the question of sanity. The film stars Himesh Patel as Jack, the struggling musician who gets hit by a bus during a global blackout after which he is apparently the only person who remembers The Beatles existed. This leads to some humorous abortive Google searches which only turn up results about insects and a hilariously abortive world premiere of “Let it Be.” (An added bit of entertainment is that throughout the film we discover The Beatles are not the only thing that has disappeared.)

Jack initially assumes that everyone is putting him on, but the above-mentioned Google searches followed by the fact that his vast record collection no longer has his cherished Beatles albums shake his foundations. But the interesting thing is that Jack concludes The Beatles have somehow disappeared. He never considers the alternative explanation that they never existed in the first place and that “The Beatles” is nothing more than an elaborate delusion Jack created to account for his own genius.

Of course, the reason Jack never considers this is presumably because the plotting of the film has no interest in exploring the shadowlands between sanity and madness. But it surely is a far simpler hypothesis, especially when we have so many other examples of false memory: e.g. do you remember the Berenstein Bears? Don’t be so sure. Memory can be very tricky.

So about that whole sanity thing. What if I should wake up tomorrow to find nobody had heard of Alvin Plantinga? Would I start making surprisingly novel contributions to debates about the problem of evil and the epistemology of theism? And would I think I were stealing the arguments of a philosopher who once existed — or who exists in another possible world — or would I surmise instead that my arguments came wrapped in a delusion? I am quite certain that at the least I would pause seriously to consider the delusion possibility. How could I not?

This brings me to the second thing. Spoiler alert! Jack eventually decides to let the world know these are not his songs and he retires from his music career. Jack is persuaded by a truly fascinating conversation (that is one spoiler I won’t give up) that this is the ethically right thing to do. But I’m not so sure. There is a minority report in the film which Jack considers but then dismisses, one which says that it is perfectly right for Jack to appropriate The Beatles extraordinary musical catalogue. And I’m not so sure that they’re wrong about that.

So that’s what Yesterday gave me: an opportunity to ruminate about sanity and ethics. Not bad for an otherwise lighthearted romantic comedy.