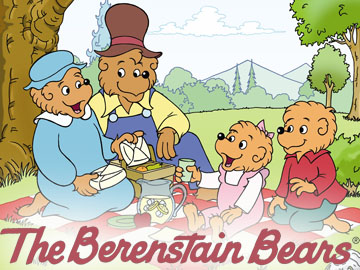 If you stare long enough at that first “a” you will eventually discern the faintest outline of the original “e”. Trust me, it’s there.

Like many other people, I grew up reading The Berenstein Bears. Or so I thought. However, it turns out that the series (and the bear family’s surname) is spelled Berenstain.

Sounds suspicious to me. How do you explain a persistent, collective group memory that Berenstain is really Berenstein?

The son of the authors insists that his surname (and that of the bears, and their book series) was always spelled Berenstain.

Of course, he would say that if he’s in on the conspiracy.

One popular theory, dating back to 2012, proposes that this is evidence of a parallel universe in which the Berenstain doppleganger is Berenstein.

Sounds a little implausible to me.

I prefer a more down-to-earth conspiracy.

And that brings me to the Comma Johanneum, a short clause appearing in 1 John 5:7-8 which provides the most powerful and succinct summary statement of the Trinity in the New Testament. Here it is in the KJV:

7. For there are three that bear record in heaven,

the Father, the Word, and the Holy Ghost:

and these three are one.

8. And there are three that bear witness in earth,

the spirit, and the water, and the blood:

and these three agree in one.

Beginning with Erasmus in the 16th century, scholars have been challenging the integrity of this text, not least because it is not to be found in the earliest manuscripts. And so a consensus emerged that this longer and robustly Trinitarian text was an interpolation. As a result, contemporary Bibles have a significantly shorter (and not obviously Trinitarian) rendering in keeping with the earliest manuscripts, as in the NIV:

“For there are three that testify: 8 the Spirit, the water and the blood; and the three are in agreement.”

But the Comma Johanneum has always had its defenders. So how do they explain the lack of early textual support? One theory, dating at least to the early 17th century, attributes the lack of support in the earliest manuscripts to an Arian conspiracy. In short, non-Trinitarians malevolently removed the Trinitarian texts from the historical record in a bid to promote their theological perspective.

That may sound rather implausible, I must admit. But perhaps something like this happened with our present case. Could it be that some shadowy and very powerful interest (e.g. an “Eastern Syndicate”) has amended the record by changing all references to “Berenstein” in books, film, and elsewhere, to “Berenstain”? And the only remaining evidence to the contrary is our collective memory of “Berenstein”?

This morning I asked my thirteen year old how the name is spelled. She responded by spelling out “B-E-R-E-N-S-T-E-I-N”. When I pointed out her “error” she replied:

Then after about a minute she added:

“But I remember it being spelled with an ‘e’.”

Indeed, so do the rest of us.

And after another minute:

So now we know that the change must have occurred within the last decade or so. The question is why? What is that shadowy Eastern Syndicate up to?

Whatever it is, it ain’t good.

By the way, my daughter just “discovered” that Charlie Brown cartoonist Charles Shulz doesn’t have a “t” in his last name, despite the fact that we both remember it being there.

This may go deeper than we thought…