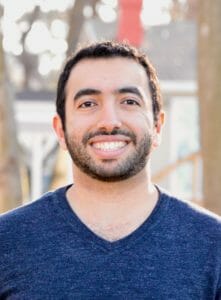 Paul Rezkalla has an MA in Philosophy and Ethics from the University of Birmingham and an MA in theology from St. John’s University. He is currently working on a PhD in philosophy at Florida State University (with the esteemed Michael Ruse) and an MSc in cognitive and evolutionary anthropology from Oxford University. In this conversation, we talk about the question “What’s wrong with the scientific study of morality?”

Paul: Thanks for having me, Randal! Well, I was born in Egypt and grew up in NYC. In college I was studying pre-medicine on track to become a physician (like a good Egyptian kid) and then I got a taste of philosophy and decided to pursue graduate studies in philosophy, as a result. My interest in the sciences never really subsided and I guess that may be what drew me to questions about the relationship between ethics and science (and evolution, in particular). I’m really interested in whether philosophers and scientists are studying the same set of phenomena when they study “morality.”  I’m also interested in questions about our moral intuitions, specifically the extent to which intuitions about values are shared cross-culturally and whether evolution tells us anything important about how we make moral judgments.

Anyway, enough with my bad jokes. What say we jump right in? In his book Consilience: The Unity of Knowledge, E.O. Wilson provocatively argues that eventually non-scientific fields like history, philosophy, art, and morality will “fuse” with the sciences to produce one continuous body of scientific knowledge from fundamental quarks up to aesthetics, morality, and religion. What do you think? Is that a vision that could possibly be realized? Or is it just scientism run amok?

Paul: While it may seem like an interesting project at first glance, Wilson’s vision is misguided, at best. Elsewhere he emphasizes that “the time has come for ethics to be removed temporarily from the hands of the philosophers and biologicized.” It’s a bit unclear what Wilson (and others like him) have in mind when they say things like this, but, as Philip Kitcher has pointed out, there are controversial and uncontroversial ways of understanding this sort of “biologicizing” project. Sure, science can shed light on why we have certain tendencies to prefer our family members over strangers or why we feel repulsed at the thought of lighting a cat on fire (philosophers love bizarre, macabre examples). Science can even helpfully point out that humans are prone to judge others more harshly for committing the same bad actions that we ourselves are guilty of and that “clean smells” can incline us to be more generous when asked to give to charitable causes. However, it’s not clear that science can tell us whether we should judge others or give to charity, or light cats on fire. Ethics has a unique “ought-ness” quality that puts it outside the realm of scientific inquiry. This feature (among others) throws a massive wrench in the “biologizication” project. In sum, as Kitcher puts it, science can’t tell us “what ethics is all about”.

Randal: Hmm, are you describing what philosophers commonly refer to as the is/ought fallacy?

Paul: That’s one way of putting the problem. What we’re doing when we do science is describing the way the world is, but that doesn’t tell us how the world ought to be. The “ought-ness” we mentioned earlier is not something we discover by doing science, it’s a different project, altogether. For example, there’s really good evidence showing that we have implicit racial biases that incline us to form judgments (both good and bad) about people simply because of how they look or what their names sound like. There are evolutionary and cultural explanations for why and how our brains form these mental shortcuts, but notice that this is just a description of a human behavioral tendency. However, it’s clear that we should try to become aware of our implicit biases and try to shed them as best as we can. This latter fact is not a scientific fact, rather it’s a fact about what we ought to do–it’s prescriptive. What is and what ought to be are conceptually distinct. Science is really good at the former, but the latter is a philosophical project.

Randal: Fair enough, but there are many philosophers and scientists that disagree with you. Could it be, for example, that oughtness is an emergent property? A single H2O molecule doesn’t have the property of being wet, but put enough of them together and wetness emerges out of the whole. Is it possible that when you get sufficiently complex collections of matter that they become moral agents and their actions take on emergent moral properties of being morally praiseworthy or blameworthy which are analogous to the collection of H2O molecules taking on the property of being wet?

Randal: Perhaps we can take a step back. I suspect some folks reading this may be wondering this: how does one decide when one is doing science vs. philosophy? Perhaps I can put it this way: do you see a hard and fast boundary between these disciplines? Or is that boundary porous or blurred? And at the risk of rambling, let me ask it in another way. Theologians are often warned of a God-of-the-gaps, of invoking a theological explanation when a scientific one will suffice. Is there a similar warning for the philosopher? And if so, how do you decide when that is?

Paul: That’s always a fun question! I’m not a huge fan of trying to draw hard lines between disciplines (demarcation projects). But I do think there’s a fairly obvious and non-controversial distinction between empirical and non-empirical claims. For example, if we’re arguing over whether or not we should buy diamonds and my position is that we should not buy diamonds given their ethically dubious sourcing, my argument will be comprised of one empirical premise and one non-empirical premise.

Non-empirical Premise: If diamond-harvesting results in or is dependent on the loss of human lives, then we should not buy diamonds.

Empirical Premise: Diamond-harvesting does, in fact, result in or is dependent on the loss of human lives.

Conclusion: Therefore, we should not buy diamonds.

So, to go back to what first brought all of this up, it’s not clear that questions about moral responsibility and normativity are empirical questions. Sure, there may be a dimension of empiricality when we’re gathering the facts to determine whether someone is morally responsible, such as whether she was in proper control of her actions and had sufficient knowledge of what she was doing. But those facts only work as only part of any argument offered to determine whether she is actually responsible, blameworthy, etc. Those arguments will include a non-empirical premise like “we should blame those who do X and are in control of their behavior when doing X”–and we don’t arrive at those premises purely by accumulating evidence from the way the world is. We’re not doing science when we’re working out those non-empirical premises. Those are more properly in the domain of philosophy.

Randal: Excellent, a very helpful response. So as we wind this conversation down, I’ll offer a crude summary and invite you to respond, noting both where you agree and where you disagree as well as where, as the saying goes, I’m not even wrong.

Paul: Or another way to put it, “science is good for what science is good for”! Science is one of our best tools for understanding the world. It gives us lasers, refrigeration, and even energy by harnessing the sun! Science also helps illuminate our racist, sexist, and overall selfish tendencies; it confirms that humans are susceptible to a host of nefarious motivations and impulses. But that’s as far as it can go. When we’re trying to answer the questions of how we ought to be and live or which impulses we ought to ignore and which to endorse, then we’re no longer doing strictly science.

You can learn more about Paul by visiting his website here.