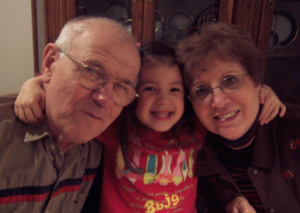 My father and mother with my daughter in 2006.

I recently wrote an article describing my last visit with my father. He passed away on the morning of April 3rd, two days after his 85th birthday. Given the number of people who linger for years in the purgatorial twilight of dementia, his relatively quick demise (he was officially diagnosed with Alzheimer’s in December 2017) was a relative blessing.

Since Dad died, people have offered various laments and consolations, but I am filled only with gratitude and peace. We had a good run of it, and in the catalogue of human suffering the world over, the loss of a parent in their 80s is comparatively low on the scale.

When one person expressed their regrets, I thanked them while replying with thankfulness for the life lived and the relative painlessness of his departure. The person observed, “But we also lament what could have been.” Perhaps. To be sure, it is possible that dad could have lived to be a centenarian with a razor-sharp mind to the end, but it is also possible that he could have collapsed of a heart attack at 42. Rather than lament what greater possibilities could have been realized, I prefer to be thankful for what I did receive.

Regardless, we all walk a slightly different road of lament. There is no right or wrong to the journey of grief and the dawning of hope and acceptance that lies beyond. There is only the road itself which must be walked.

Over the last few years, I have drawn solace from varied sources including the atheistic metalcore band Architects. (Betcha didn’t see that one coming!) A few years ago, the band faced the untimely death of a bandmate to cancer. Their own struggle with mortality is expressed powerfully in many songs. Here’s a stanza from “Death is not defeat”:

Holding on tight to what’s left of our time
We’ve hidden away, but it’s in the design
Why do we fight what we can’t define?
Don’t be afraid, we all cross the same line

It’s true, we all cross the same line. I’m also happy to agree that death is not defeat. However, as you can guess, I have a very different take than the Architects on the nature of that defeat: they defiantly shake their fist at fate as mortality closes in, whereas I look to the hope of a life beyond life; they are like the 300 Spartans doomed to defeat at the Battle of Thermopylae whereas I believe the battle has already been won:

One of the crucial stepping stones in growing up involves children coming to terms with the mortality of their parents. Sometimes the lesson is early and especially horrific as when my friend’s father committed suicide while we were still in grade school. What an awful way to face the fact of a mortal parent.

I am forever grateful that I never faced such an awful shock. Instead, I gradually acclimated to the mortality of my parents. I would put the major moment of transition at exactly twenty years ago, April 1st, 1999. That was the year that my father turned 65 and I suddenly found myself grappling with the reality that he was a “senior citizen”. In commemoration of that sober event, I wrote the following poem:

Father, whither have you gone?

You’ve grown old before me.

With the bondage of time

And that wicked mortality.

I fear I have not used

Our years to the best

I fear more each day,

That too soon you’ll find rest.

‘Time to grow up lad’

‘Time to be on your own

And forge your own way.’

Have I really grown up

to become a man?

I need your steadying hand.

As Christians, I know

We have a greater destiny.

So to God be the praise!

Please grow old no more? Needless to say, that was a futile request. Like all of us, Dad grew older without fail and eventually crossed the line, that same line that each of us will cross one day. Such is life in this mortal coil that it is accompanied, without fail, by death.

As I gaze out the window this April morning, I look upon the gradual dawning of spring and the promise of new life. And yet, that new life has not, as yet, come to the northern prairie. It still remains a promise, a hope, a future reality. Such is my place on this journey as I find myself still in the midst of death, living in Holy Saturday and waiting, as yet, for the dawning of Easter morn.

But that Easter morning will come, and new life with it, for death is not, and never shall be, defeat.