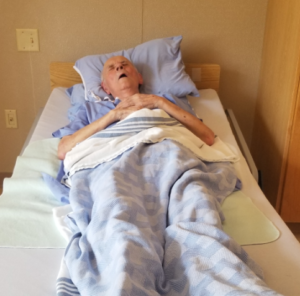 My dad was diagnosed with Alzheimer’s disease on a rainy afternoon in December 2017. Afterward, we went out for lunch to a restaurant downtown. Dad got confused and thought we were in Mexico. “Wow,” I joked, “It’s a lot cheaper to go on vacation when you have Alzheimer’s!” Gallows humor is a dark and welcome companion on this journey of pathos.

Pathos. Some diseases evoke anguish. Alzheimer’s, by contrast, is the embodiment of a slowly accumulating, smoldering sadness. The pity and sadness that accompany Alzheimer’ are compounded when it strikes a parent, one that once seemed an impregnable source of strength and support.

Dad was that. Growing up, he had no shortage of stories from his years in the “school of hard knocks”. He came to Canada in 1952 as an 18-year old who didn’t speak the language. Gradually, he worked his way up from being a farm hand to working various hard jobs. My favorite image was the time he was working the oil fields on the northern prairie. At night he slept “in forty below beside an open flare pit to keep warm, with two frozen oranges in my pocket.” As I grew up with a hot meal every night, I often thought about those two frozen oranges. 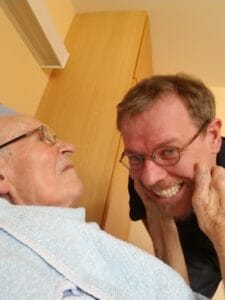 Last week, I flew home for a visit. Dad is no longer responsive. By my estimate, he has lost at least forty pounds since I visited at Christmas. He is now being prepared for palliative care, so the likelihood is that this will be our last visit.

As I leaned in to make a connection, he suddenly reached out and grasped my cheeks. So, of course, I grabbed my phone to record the moment for posterity. Moments of connection with an Alzheimer’s patient are increasingly meager and fleeting. This was likely my last moment of meaningful interaction with Dad on this earth.

The day that we drove out to the care home, there was a heavy fog hanging over the lake. As we passed over the bridge, we could see it disappearing into the fog. There is something disconcerting about being forced to drive into a fog. But when you’re on the road and traffic is moving, you don’t really have a choice. There is no direction to go but forward. 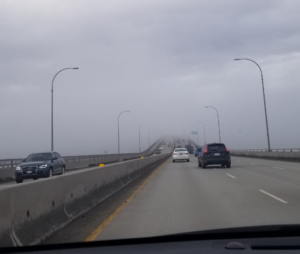 That image provides a fitting metaphor for the road that lies ahead. Whether the ailment is the ceaseless progression of Alzheimer’s or mortality more generally, we all have one choice: continue to drive forward into the fog, that fog of mortality that will claim all of our loved ones and, someday, us as well.

Hopefully, we may do so with thanks for the road we’ve traveled and anticipation for the future that lies ahead.