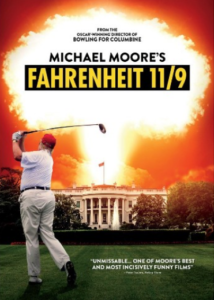 Today, I tweeted a brief review of Michael Moore’s latest film (released last fall): Fahrenheit 11/9. I decided to post it here as well (albeit in slightly edited form).

Just watched Michael Moore’s Trump film Fahrenheit 11/9. Definitely worth watching. It’s less about Trump than the systemic corruption of a political system beholden to monied interests. Ironically, I think the most haunting moment is when Moore depicts Barack Obama traveling to Flint, Michigan (while still president), not to offer relief for a lead-laced public water system which is poisoning a poor population, but rather to tamp down fear by pretending to drink the water.

The film also includes typical Moore features — e.g. a lame stunt (involving Flint water) and a cartoonish juxtaposition of Hitler imagery with a Trump voice-over. But that latter segment receives gravitas by the analysis of Yale historian Timothy Snyder and these ominous words: “The thing we have to mobilize for is not safety but freedom.” (For my review of Snyder’s book On Tyranny, click here.) And while Moore’s harangue of capitalism may lack a solution, his concern for the poor and disenfranchised can’t be faulted.