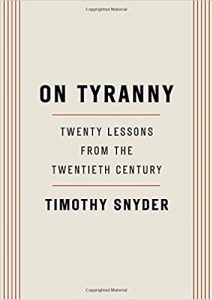 C.S. Lewis once observed, “I think no class of men are less enslaved to the past than historians. It is the unhistorical who are usually without knowing it enslaved to a very recent past.”

That quote perfectly captures the motivation behind Yale historian Timothy Snyder’s new book. A breezy yet learned manifesto, On Tyranny is an invitation to understand the presidency of Donald Trump in light of the rise of anti-democratic movements in the twentieth century.

Each of the twenty short chapters highlights one particular lesson which can inform and guide activists of this generation to oppose authoritarianism and secure democratic institutions for the future.

To be honest, I was initially skeptical of Snyder’s book as it brought to mind Naomi Wolf’s 2007 monograph The End of America: Letter of Warning to a Young Patriot. While there was much to commend Wolf’s spirited critique of the Bush administration and its assault on democratic institutions, it nonetheless seems to me that she significantly overplayed her hand in attempting to draw parallels between the Bush administration and National Socialism. With that in mind, I worried that Snyder’s book would also be hampered with an overly partisan agenda

I’m glad to say that is not the case. In my opinion, On Tyranny quickly vindicated itself. Page after page it draws on insights gleaned from communist and fascist regimes to illumine present events.

For example, chapter 4 advises us to “Take responsibility for the face of the world.” (32) Here Snyder warns against the authoritarian tendency to divide, marginalize, and scapegoat. Later in the book he provides an overview of how Vladimir Putin has targeted Muslims as a means to undermine democratic institutions and secure greater power for himself.  Needless to say, Trump is doing precisely the same thing. This is the time when we need to stand with the marginalized other against this authoritarian strategy.

Trump’s unrelenting assault on the free press and all facts which fail to meet his authoritarian agenda presents us with another sobering example. We live in an age of “alternative facts” and the rapidity at which it is taking hold is, frankly, terrifying.

Case in point: just today MSNBC reported that currently two thirds of Republicans believe Russia did not interfere in the 2016 election. This despite the fact that seventeen government security agencies insist that Russia did precisely that. This cavalier dismissal of evidence and consensus expert opinion is even more stunning when one considers that the Republican Party has distinguished itself as the anti-Communist cum Russian party since WW2. It is no longer: in less than a year Trump has completely changed the cultural ethos of the grassroots of the party into denying evidence, facts, and history. This is itself a fact which should chill us to the bone.

Chapter 17 warns, “Listen for dangerous words.” (99) Snyder focuses in particular on the propagandistic use of terms like “terrorism” and “extremism.” He writes, “When politicians today invoke terrorism they are speaking, of course, of an actual danger. But when they try to train us to surrender freedom in the name of safety, we should be on our guard.” (100)

Snyder continues, “Extremism certainly sounds bad, and governments often try to make it sound worse by using the word terrorism in the same sentence. Bu the word has little meaning. There is no doctrine called extremism. When tyrants speak of extremists, they just mean people who are not in the mainstream–as the tyrants themselves are defining that mainstream at that particular moment.” (101)

As an example, consider this tweet just today in which Trump invokes both terrorism and extremism in the same sentence:

America is proud to stand shoulder-to-shoulder with Poland in the fight to eradicate the evils of terrorism and extremism. #POTUSinPoland pic.twitter.com/MHxRmVvtsh

Other chapters take on topics like the rise of paramilitaries (chapter 6: see in particular Snyder’s chilling description of the nationalistic mob violence at a Trump rally (45)) and  the need to engage in visible support of public institutions (chapter 15).

The book is certainly not perfect. For one thing, at points it feels like it was rushed to print. As a result, there are places where the text could have been wordsmithed for greater clarity and effectiveness. For example, chapter 13 is headed with the following advice: “Practice corporeal politics.” (83) Huh? What’s that supposed to mean? Later in this short chapter we read this gem: “nothing is real that does not end on the streets.” (84) Now that’s a great line, it’s clear and evocative, and it would make a far better title than “Practice corporeal politics.”

While On Tyranny is not perfect, it is timely and hugely important. This is not a matter of political partisanship. Rather, it concerns the guarding of democracy and its institutions over-against authoritarianism and nationalism. “Eternal vigilance,” it has been said, “is the price of liberty.” (27) On Tyranny equips you to stand on the watchtower.

You can order On Tyranny here.