I have long been interested in the way that Bibles interact with the violent portions of scripture. In “How do you teach God’s genocide to children?” I noted how the Zondervan Adventure Bible for children deals (or doesn’t deal) with the genocidal mandate in Deuteronomy 20. Here below I have another example, this one drawn from Joshua 6 in Zondervan’s True Images Bible. So far as I can see, the targeted demographic of this Bible is pre-teen and teen girls.

I’ve included the page below. Note the commentary offered under the “Truth or Dare” section. It ignores the fact that the text appears to be recounting a military assault on a small city that includes civilians with the mandate that all the people within the city be killed.

Instead, it focuses on the detail that the Israelites are directed to go into battle with trumpets. It then draws the general moral lesson that sometimes God asks us to do counterintuitive things as well, and that he does so at least in part so that we will depend on his strength. 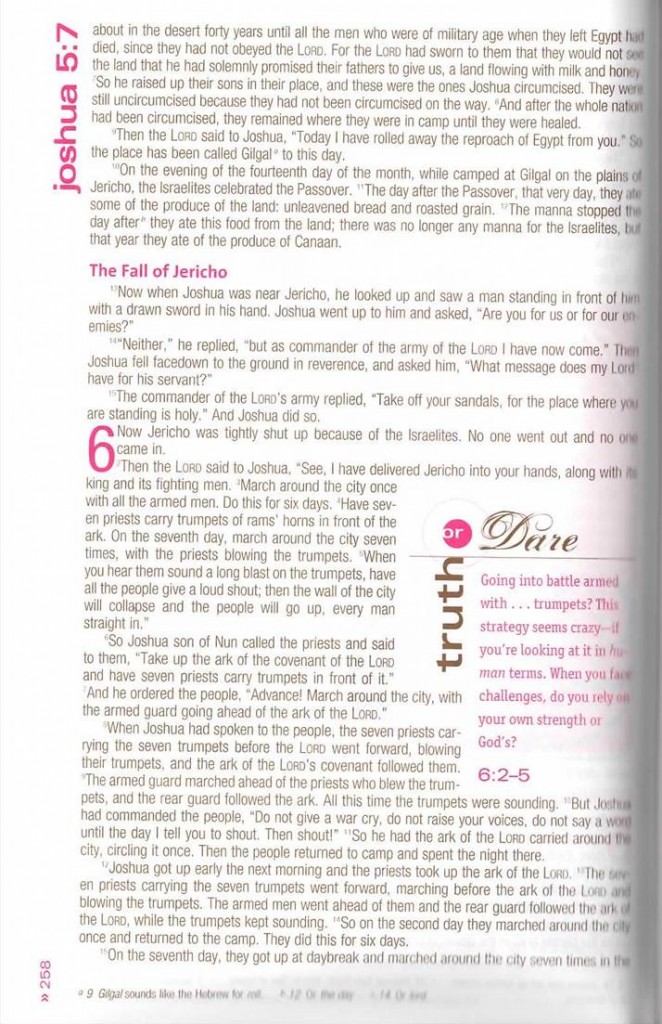 I trust that I don’t have to persuade you that this is a wholly inadequate, and even irresponsible way to handle a difficult text. However, Christians have a long history of superficial readings of biblical texts whilst often reducing those texts to a trite moral or wisdom axiom. Christian singer Larry Norman wonderfully lampoons this approach to the Bible in his classic 1969 song “Moses in the Wilderness”. The song describes a Sunday school teacher stumbling through the story of the Exodus and then appending at the very end a trite wisdom axiom: “Never borrow money needlessly.” Suffice it to say, the teacher failed to help his students grapple with the story.

The True Images Bible fails as well. Sure it is true that we need to trust in God. But we also need to engage with the text and not pretend it is something other than it is.