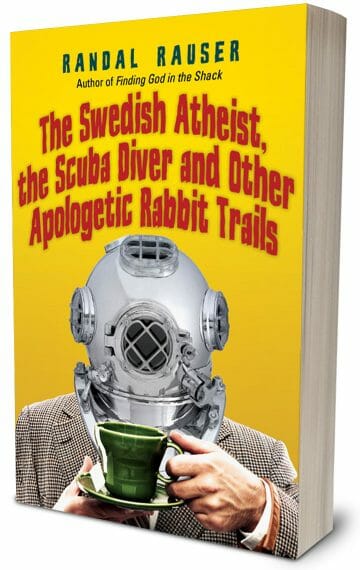 In the real world, we don’t usually sit in lecture halls debating worldview issues in systematic arguments. Chances are that we’re more likely to have haphazard, informal conversations over a latte in a coffee shop.

Meet Randal Rauser, a Christian, and Sheridan, an atheist. Over the course of one caffeinated afternoon, they explore a range of honest questions and real objections to Christian faith. Do people hold to a particular religion just because of an accident of geography? Is believing in Jesus as arbitrary as believing in Zeus? Why would God order the slaughter of infants or send people to hell? How do you know you’re really real, and not just a character in someone’s book?

Their extended conversation unfolds with all the rabbit trails, personal baggage and distractions that inevitably come in real-world encounters. Rauser provides substantive argument-based apologetics but also highlights the importance of apologetics as a narrative journey. As we get to know Sheridan, we better understand the personal history that drives his atheism and the issues that motivate his skepticism.

This imaginative narrative is a model of the rigorous pursuit of truth in conversation. Apologetics is not just about winning arguments; it is a transformative apprenticeship where eternity touches down in everyday life. It’s about the discovery of truth through winding, weaving, honest, aimless, pointless and completely purposeful conversations between people who desperately want to know the way things really are.

You, dear Reader, are already in this book. Randal has written you into the story, and you’re sitting with him and Sheridan in the coffee shop, listening in on their dialogue. Discover what they have to say to each other—and to you.

“Rauser’s dialogue brings the best tools of philosophical thinking within the reach of thoughtful believers and skeptics alike. His representative in the conversation knows when to stick to his guns, and when to admit to uncertainty and fallibility. His atheist counterpart is no straw man–he knows his Dawkins, Dennett and Hitchens. Rauser has the philosophical chops to cut through a lot of rhetorical nonsense, but he also has the intellectual honesty to face up to the genuine difficulties confronting his faith. This enjoyable book is a model of candid, winsome, thought-provoking apologetics.”

See this article on The Swedish Atheist in the magazine “The Bridge.”

Check out this radio interview: Randal on Faith Radio Mornings

Check out this podcast interview: Author_Talks_-_Episode_27_-_Randal_Rauser