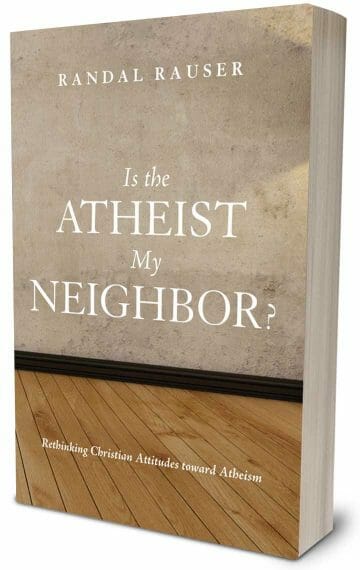 Many Christians seem to think so. For the last three centuries Christians have widely assumed that atheism is always a result of a rebellious, sinful rejection of God. According to this view, at some level atheists really do know there is a God, but they sinfully suppress this knowledge because they want to live independently of God.

But what if that is not correct? What if some folks are atheists not because they’re sinful and foolish but because they’ve thought hard, they’ve looked carefully, and they have simply not found God? What if the common Christian assumptions about atheism are little more than an indefensible prejudice? What if the atheist really is our neighbor?

There are some whose way of following the first of the great commandments has, in the matter of nonbelief, meant violating the second. In this brief and lively but remarkably full and acute discussion, Rauser shows the way out of this problem. Impressively fair, and writing not perfunctorily but with feeling, he has found a way to express genuine neighborliness both to atheists like me and to Christians who struggle to reconcile love and loyalty.”
—J. L. Schellenberg, Professor of Philosophy, Mount Saint Vincent University, author of Divine Hiddenness and Human Reason

In our post-Christian–and increasingly post-theist–western culture, we need voices like Rauser’s that repudiate simplistic, belligerent, and belittling Christian rhetoric, and motivate us to think more critically and humbly about being good neighbors–good world citizens–as we walk the path of Christian faith. I will be recommending this book to many who seek better ways to live among others–and for those who are honest enough to struggle with their own ‘inner atheist.'”
—Peter Enns, Abram S. Clemens Professor of Biblical Studies, Eastern University, author of The Bible Tells Me So: Why Defending Scripture has Made Us Unable to Read it.

When I first heard about this book, I said the same thing I do every time Randal comes out with a new book, ‘What? He’s written another book?’ But . . . I have to admit that if I want anyone speaking to Christians on behalf of atheists, or to atheists on behalf of Christians, it’s Randal. This book proves once again how capable he is of bridging such cultural divides.”
—Kevin Miller, director of Hellbound?