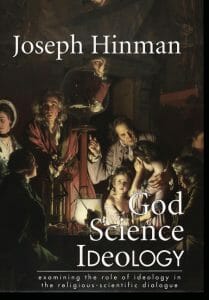 A summary of my new book: God, Science, Ideology (GSI) makes the argument that New atheism is not scientific in its appraisal of God belief, but uses science ideologically. I begin with a discussion of what scientism is, the name I used to tag the atheist ideology of science as the only valid form of knowledge. I then explore the historical development of this trend,I lay it at the feet of the French Philosophes of the French revolution.

I find a common charge leveled against my use of this term by atheists is the mistaken idea that term was created by evangelical fundamentalistand is thus just a bromide. I can’t find who coined the term the fact that it was popularized by Thinkers who are clearly not fundamentalists:

The term was used by Karl Popper, Frideriocj Hayek, and other secular thinkers, many of them atheists, as far backas the 1960s.

Karl Popper is not going to be using a term coined by fundamentalists.[1] I then discuss the nature of the ideology of scientism and what real science would be and how it differs.Here I plug in some concepts I’ve used in my internet battles for some time. That is the “atheist fortress of facts” and the “reduction of knowledge to technique.” This just reinforces how they manage scientism.

Reduction of knowledge to technique means that naturalism is mandated as replacement for
metaphysics. Thus if knowledge cannot be transformed into a concrete demonstration it’s not worth having; this is an extension of scientism, science is the only valid form of knowledge. Yet this move is not science but ideology.

I begin the discussion with a refutation Colin Blakemore (neuroscience) at Oxford.[2] He makes the statement that religion is one gene away from “defeating religion.” He apparently envisions a chess game between religion and science, and points are scored by making a scientific explanation of the world. Of course explanation means scientific explaination so obviously science is more scientific than religion. In other words, it’s not a fair comparison; not scientific thinking but ideology. I argue that science and religion do different things so they are not competitors. The primary purpose of religion is not to explain how the world works but to mediate ultimate transformation. This is primarily experential. Science can’t even entertain the concept of “transformation.” I also discuss the definition and origins of ideology. It traces back to the philosophes of the French Revolution.

Here I discuss the issues involving consciousness, The reduction of consciousness to brain chemistry is areduction to technique. This results in brain/mind determinism that reduces the individual to a robot. This section culminates in analysis and refutation of biologically based ethics. I base my view largely upon the works of David Chalmers. I oppose John Searle. Chalmers’ major argument is that brain/mind reductionists pull a bait and switch. They substitute brain function for consciousness, arguing that since brain function reduces to the physical consciouness must as well.

I offer two chapters under the heading “stripping away the illusion of technique,” Those two are: Can science disprove religion? Can science disprove God? In this section I castigate Dawkins (God delusion) Krauss,(Universe from nothing) and Stinger (God the failed Hypothesis). I show all three are illusions of technique.The illusion of technique is a concept I take from William Barrett, Irrational Man. It means the content of an idea is submerged in the technical prowess generated to enact it. How becomes more important than why, techical know-how superceeds reason.

Each of the three atheist scientists use the techniques I’ve discussed to reduce God to the level of a great biological organism in the sky. Stenger reduces God to a failed sc9oetiiofc hypothesis. They mustdo this in order to deal with God otherwise he is transcendent and be so dealt with. Their disproofs merely amount to an argument that God is not needed to explain things. Thus God is reduced to an explanation for the physical world.

This Is seen most clearly in Stenger’s attempt to reduce belief in God to a scientific hypothesis. Belief in God is a living experience of divine reality. It is not science it cannot be reduced to science.At this point I discuss Bayes’ theorem as to whether it proves or disproves God.I argue Bayes is an example of the illusion of technique. It argues Bayes does neither prove nor disprove God.I also deal with the thinking of Herman Philipse. He is a philosophy and a real challenge. He is a great thinker.

Chapter 10 is called “the empirical supernatural,” Here I reprise my first book: The Trace of God. The SN is mystical experience that’s what the word was coined for (Dionysius the areopagite 500 AD==CE). I am arguing that when you legitimately use technique to back up God-belief the atheists will not have it. They will ignore 200 studies.The last two chapters deal with astronomical evidence for God and God arguments that could be made. The final chapter shows belief in God is a philosophical premise that has evolved over time but represents a reality that can be experienced. It is a living reality not a mere hypothesis.

Pick up your copy of God, Science, Ideology here (promoted).

[2] Colin Blackmore,”science is just one gene away from defeatimg religion,:” The Guardian Fev 21, 2009