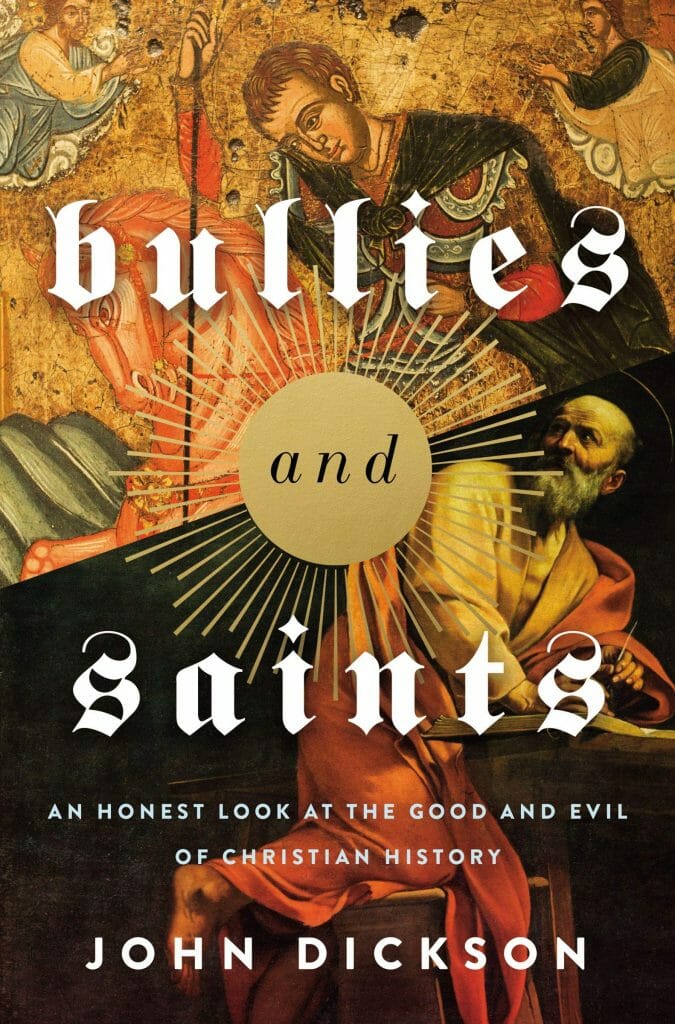 John Dickson. Bullies and Saints: An Honest Look at the Good and Evil of Christian History. Zondervan, 2021, 328 pp.

Historian Howard Zinn observes, “all history, while recalling the past, serves some present interest.” Anyone who has spent time on the interweb talking to skeptics and atheists has likely encountered Christian history told from the polemical interest of an anti-Christian skeptic. This history is decidedly one-sided and tells a depressing narrative dominated by the Crusades, witch burnings, the Spanish Inquisition, religious wars, the trial of Galileo, and recent clergy sex abuse scandals.

As a Christian and historian, John Dickson has his own apologetic interests when he tells the story of Christian history. But importantly, his approach in Bullies and Saints is not to deny or downplay the litany of ill-fated events that populate the secular polemicist’s narrative. Not only does he admit the problems (albeit with a raft of caveats and correctives), but he relays them with far greater acumen than you will typically encounter in the secular polemicist. Consider, for example, that the book begins in medias res  with eyewitness accounts of the Crusades in which Christ followers boast of slaughtering infidels in Jerusalem until there was “blood up to their knees” (2). The book covers all the other standard talking points of the anti-Christian polemic as well.

At the same time, Dickson exposes the bald confirmation bias of the anti-Christian historical polemic by also telling the positive side of the story, that which pertains to the “saints”. It begins with the Jewish doctrine of the imago dei which furnished Christians with a valuation of life unknown in the Greek and Roman worlds. As an example, Dickson cites a letter from 1 BC in which a man gives the following directive to his pregnant wife: “if you bear a child and it is male, let it be; if it is female, cast it out.” (34) Those chilling words reflect the ancient pagan view of human life as lacking intrinsic value. By contrast, Christians distinguished themselves in the ancient world by resolutely rescuing foundlings and caring for the least of these. This ethic resulted in the establishment of the first hospitals in the fourth century (chapter 10).

Dickson also highlights the uniqueness of the teaching of Jesus including his ethic of love (chapter 3) and sober call to avoid hypocrisy (chapter 4). In that teaching we find the foundation of the faithful church’s witness to the world. And time and again, we find the church is a prophetic witness when it adheres closely to the life and teaching of Jesus.

Dickson also corrects several popular stories that are boilerplate anti-Christian polemic. For example, the infamous martyrdom of pagan scholar Hypatia, while utterly reprehensible, was a manifestation of the unique social and political circumstances of Alexandria at the time. And while the Inquisition occasionally veered into dark moments of persecution, torture, and anti-Semitism (especially during the reprehensible reign of Tomás de Torquemada), over most of its centuries’ long existence, this religious court was notably more humane and maintained more rigorous standards of evidence than the secular courts alongside which it operated.

Dickson is also quick to point out when secularists overlook shocking examples of secular violence such as typified the French Revolution: “The Terror of 1793-1794 is such an interesting example not because it resulted in so many unjust deaths but because those killings were justified on wholly secular grounds.” (278).

Bullies and Saints is an engaging read and one that I definitely recommend. Dickson is absolutely right to recognize that the Christian’s credibility depends not only on highlighting the undeniable contributions of the Christian faith but also freely admitting the many occasions when Christians have abjectly failed to live in a manner consistent with the faith they possess.

I did have two quibbles with the book. My first complaint is minor: the book is framed at several points as an apologetic response to the new atheists. Christopher Hitchens (d. 2011) is mentioned several times and other new atheists (most notably Richard Dawkins) make the occasional appearance as well. However, the new atheist cultural cachet has diminished significantly in the last decade and so the choice of these folk as interlocutors gives the book a somewhat dated feel.

My second concern is more substantive. While Bullies and Saints focuses almost exclusively on Christian history in Europe and the Near East, I think the book would have been enriched with a more global perspective. For example, Dickson never addresses the long and complex history of colonialism and Christianity; neither does he offer any other substantive engagement with Christianity in Asia, Africa, or Latin America.

For example, instead of devoting an entire chapter to the modern conflict in Northern Ireland (chapter 22), Dickson could’ve devoted a chapter to the Rwandan Genocide, an event which he admits was far more significant (254). In that case, over three months in 1994 the most Christianized country in Africa witnessed the most efficient genocide of the twentieth century with Christian Hutus slaughtering Christian Tutsis. What is more, the genocide itself is tied intricately to the history of colonialism and the church within the region. (For another example of bullies outside the sphere of Europe and the Near East, I would recommend Bartolome de las Casas’ ringing indictment of the evils of the conquistadores in Latin America.)

Needless to say, colonialism also has some heroes worth mentioning. For example, one could cite the case of how Christian missionaries like William Carey joined with Hindu reformers to encourage the British Raj to outlaw the barbaric practice of sati (widow burning) which finally occurred in 1829. The inclusion of examples like this would not significantly change Bullies and Saints but they would imbue the book with a more global perspective.

Pick up your own copy of Bullies and Saints here.