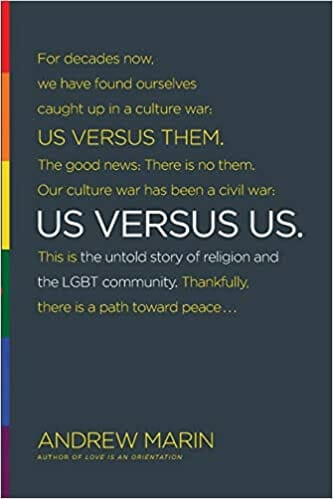 Andrew Marin. Us Versus Us: The Untold Story of Religion and the LGBT Community. NavPress, 2016. 213 pp.

Andrew Marin begins Us Versus Us by introducing us to a photograph of Marin himself and his wife hugging a gay man at the 2010 Chicago Gay Pride Parade (see below). They didn’t know the man but he was prompted to come up to them after reading their signs of apology for the way the church has often hurt gay people. A photographer captured the moment for posterity and it went viral. And that captures the spirit of Us Versus Us, a clarion call for traditionally polarized groups to come together and seek deeper understanding.

Understanding Through a Sociological Study

Us Versus Us seeks to prepare the way for more productive interaction by way of a sociological study. The book is a summary of an extensive sociological study of more than 1700 persons from the LGBT community and their relationship to religion. The survey touches on several religions including Judaism (16-18), Islam, and Buddhism. For example, Marin observes, “If there is one religious group that denies the existence of LGBT people, it’s Islam.” (13) That said, Christianity is the overwhelming  religion of focus and the results of the survey are most immediately applicable to this religious community.

In the Introduction, Marin summarizes the research methodology and the review process, citing in particular the role that atheist sociologist J. Michael Bailey and Christian sociologist Mark Yarhouse had in vetting the quantitative research (xxi-xxii). The book includes a wealth of statistics as well as qualitative data in terms of extended quotations from interview subjects. And it offers some fascinating insights and real surprises.

Chapter 1 begins with “There is No They,” and the key result: “86% of LGBTs were raised in a faith community from the ages of 0-18.” (1) Surprisingly, this is eleven points higher than the national average of 75%. Marin later explains that the increase in religiosity among LGBT people appears to be due to an increase in religiosity among individuals wrestling with same-sex attraction in their early teens who, though historically unchurched, seek out churches and youth groups for help. Intriguingly, at the same time that the average teenager tends to become less churched, the LGBT teenager is inclined to become more churched.

This surprising result captures the book’s central theme: “the culture war has always been a civil war: us versus us.” (6) In other words, there is far more overlap between religious/Christian and LGBT communities than one would suppose.

There are many other important results are to be found in the book. For example, while it was not particularly surprising to learn that the  54% of LGBT respondents who leave their religious community after reaching adulthood is double the national average (34), it is still a matter to lament. Among the reasons cited for leaving were a lack of safety in the community (18%), being kicked out after coming out (9%), and not being allowed to volunteer (6%) (38). Asian faith communities are the most likely to force LGBT people to leave their religious community (39).

Statistics like these definitely invite reflection on the nature of the church and the role that Paul’s teaching to “Expel the wicked person from among you” (1 Corinthians 5:13) has in many communities. My first bit of advice: if you do choose to bar people from volunteering or even attending your religious service because you consider them to be habitual sinners of one or another sort, you better be consistent and bar the unrepentant gossip and remarried divorcee with the same standard that you ban gay people.

Chapter 3 leads with the promising statistic that “76% of LGBT people are open to returning to their religious community and its practices.” (65) As Marin notes, this amounts to approximately 8 million people (69). And the number 1 factor that would draw them back is not a “change in theology” but rather “feeling loved” (72). As Marin puts it, “92 percent would be open to return even without that faith community changing their theology” (74). Marin concludes that this group of millions of people who are keen to return is “perhaps the most singularly definable opportunity presented to the church of the twenty-first century, a mission field ripe for the harvest….” (90)

Among the other fascinating tidbits of the study is the fact that non-religious LGBT people continue to pray in surprising numbers:
“80% … regularly pray regardless of religious identification or affiliation.” (113) As a practical exercise in building bridges, Marin provocatively suggests praying together with people you consider to be historic enemies and beginning with the Beatitudes: “I’m convinced that no one can pray through the Sermon on the Mount with their other present without being shaken and changed.” (122)

The End of Debate?

While Us Versus Us is rich with sociological insights into the nuance and complex relationship between religion/Christianity and the LGBT community in America, I was less enthused by Marin’s dismissal of the value of reasoning for a particular view of same-sex relationships. For example, at one point, Marin refers to a written debate on the topic between Tim Keller (traditional prohibition view) and Matthew Vines (pro-LGBT view). And he concludes, “In the end, Keller’s supporters ardently proclaim he is right, and thus won the debate; meanwhile Vines’ supporters simultaneously declare him right, thus the winner.” (48) Marin then openly states his skepticism about the whole enterprise: “A debate is about who argues their preexisting belief better. I guess I just don’t see the purpose to it. Who actually wins in this scenario? The answer is no one.” (48) Thus, for Marin the way forward where we find theological disagreement is not “effective articulation” but rather “relational engagement.” (48)

Marin picks up this theme later on in the book by suggesting, rather strangely in my view, that continued debate constitutes an unbiblical attempt at “assimilating” others rather than seeking to reconcile with them:

Our greatest challenge hindering this new reality is a kind of cult of agreement–the pointless cycle of trying to convince our other to believe the same as we do. That’s an act of assimilation, and while the Scriptures encourage us to seek reconciliation with our other, assimilation has no biblical mandate. Moreover, as a cultural tactic, assimilation has failed again and again…. (152)

This stance reminds me of Martin Buber’s famous quip that when the Messiah comes, Jews and Christians should agree not to ask him if he’s been here before. (Here’s one version of the famous anecdote.) To be sure, I get Buber’s point. And there can be no doubt that Christians, in particular, still have much work to do to reconcile with their Jewish neighbors for centuries of noxious anti-Semitism.

That said, I don’t think a faithful Christian could possibly take Buber’s advice literally. From the beginning, Christianity has been predicated on the attempt to persuade others of claims that one believes to be true and important as regards God, salvation, and the ethical life. As a case in point, whether in the Synagogue or the Areopagus, Paul was keen to highlight points of disagreement with Jews and Greeks and argue rigorously for his understanding of the Messiah. And Peter invites us to do the same (1 Peter 3:15).

The same point applies to the ethical demands of Christianity. According to the historic prohibition view, Scripture condemns the ethics of same sex relationships and if we are to be faithful Christians, we should do likewise. Revisionists, by contrast, argue on various grounds that Christians are not required to condemn same-sex relationships: indeed, they may be required to welcome them.

The arguments go back and forth informed by exegesis, hermeneutics, tradition, philosophical, theological, and ethical argumentation, personal experience, and a range of other factors. But one thing should be clear: you don’t dismiss the value of the debate just because individuals do not end of persuading each other. The disagreement that exists between Keller and Vines could equally be described in a thousand other debates. Just because people don’t end up agreeing after a debate does not undercut the value of the exercise.

I would have more sympathy with Marin’s stance if he stressed that reconciliation with the other provides a foundation of trust for an honest and forthright exchange of different interpretations of Scripture on matters like the ethics of same-sex relationships. Indeed, how rich it would be if he would welcome rigorous argument as part of the story of reconciliation. But so far as I can see, he offers no such basis, instead leaving all such rigorous debate under the pox of “assimilation.”

To sum up, I heartily commend Marin’s commitment to seeking the restoration of historically marginalized groups. And I further commend the way he has sought to realize that vision by way of a careful sociological study that gathers a wealth of data about the LGBT community and religion. But I regret that Marin does not acknowledge that the continued debate about the ethical question need not be a totalizing attempt to “assimilate” others. What happens when you seek restored relationships by declining to debate the very topic that was the ground of fracturing in the first place? If I may borrow a quote from Marin: “Who actually wins in this scenario? The answer is no one.”

Pick up your copy of Us Versus Us here.