When I find myself with some free time on my hands, I like to kill an hour at the flea market, flipping through old postcards and reading the messages scrawled on the back. These moments in time often give a poignant snapshot into the human experience. One of my favorites was a 1960s postcard from the (now defunct) Dunes Casino in Las Vegas. On the back, it said, “Hit a jackpot at this casino on Monday! Lost it all on Tuesday.” Ain’t that life in a nutshell?

Yesterday, I came across this unusual postcard commemorating the infamous Hope Slide in southern British Columbia. When I was growing up in Kelowna, B.C. the Princeton-Hope route on Highway 5 was the main way to get to Vancouver and so we passed the rest stop that commemorated this slide many times. The Hope Slide occurred on January 9, 1965. According to Wikipedia, it is the second-largest recorded slide in Canadian history and it claimed the lives of four people. I grew up hearing stories about the bus driver who saw the side of the mountain giving way and just barely saved the lives of his passengers. 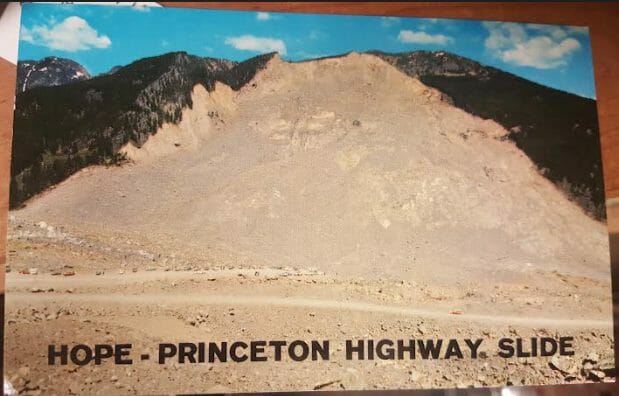 Anyway, as I said, the messages scrawled on the back often provide a poignant snapshot into the human experience. The back of this unusual postcard begins with this chilling observation: “This is what you missed by not travelling that day.” Yikes. Makes me wonder, how many “Hope slides” have we missed in our haphazard navigation of daily life, often without ever even knowing it? 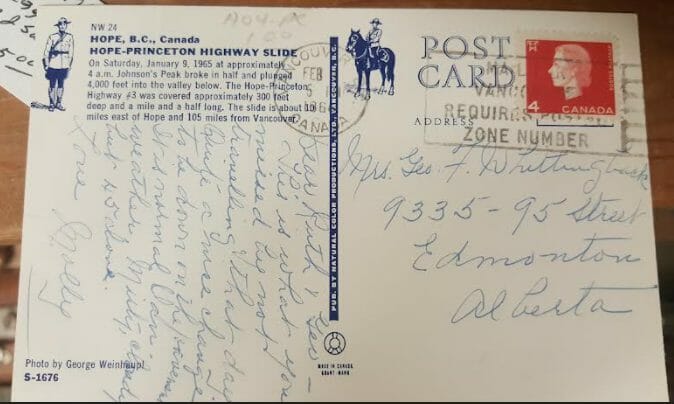