In Jesus Loves Canaaanites I argue that the purpose of Scripture is to make us like Jesus (2 Tim. 3:14-17).  And being like Jesus means, among other things, loving God with all your heart, soul, mind, and strength and loving your neighbor as yourself (Matt. 23:37-40). And your neighbor is the person you are least likely to be inclined to love, the person you are inclined to view as an enemy (Matthew 5:43-48; Luke 10:25-37).

If that’s the central purpose, point, raison d’etre, end, of Scripture, then it follows that if you read it in a way that diminishes love of neighbor, you are reading it wrong. And there are few examples of biblical reading as overtly corrupting of this call to love one’s neighbor as the toxic genocide apologetics still widely embraced by many Christians.

In this article, I want to consider one awful example. This one comes from Jack Deere. While Deere became well known in the 1990s as a vocal supporter of the charismatic gifts, he started off his career as an Old Testament professor at Dallas Theological Seminary. And in the joint faculty publication Bible Knowledge Commentary: Old Testament, Roy B. Zuck and John Walvoord, eds. (Colorado Springs, CO: David Cook, 1983), Deere writes the essay on Deuteronomy. In this excerpt, he provides a defense of the genocidal command of 7:2-ff. 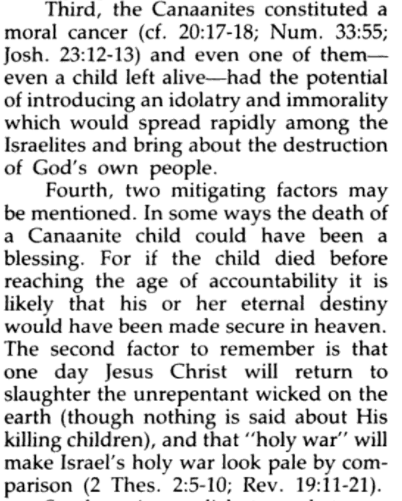 There is nothing new here: these talking points are boilerplate for genocide apologists. But that does not mean we should allow ourselves to become numb to the moral horror and offense of what is being proposed here. So what say we mull over these two points for a bit?

Let’s start with the third point. Genocide apologists love to refer to Canaanites as cancer. Deere drives the point home by treating single individual Canaanites, even one small child, as equivalent to malignant cancer cells. If that single small child had been allowed to live, so says Deere, he or she would present a malignancy that could’ve spread “idolatry and immorality” through the Israelite community.

This claim has a certain logic to it for those already committed to dehumanizing and othering an entire group so as to justify their eradication. But to the rest of us, it is obvious logical and moral insanity. Infants and small children are not like cancer cells that spread the malignancy of their culture in other cultures.

Deere’s fourth point consists of two “mitigating factors”. The first one is stunning in its audacity: hacking small children into pieces is merciful because they will probably go to heaven. Note that Deere can’t even say that’s a guarantee: it’s merely “likely” on his calculus. In other words, he tacitly admits that it is also possible that they actually go to hell. But because Deere invokes the wooly concept of an “age of accountability” he at least has a hope that the Israelites were engaged in mercy killing at least concerning the younger members of the Canaanite community.

The second factor boils down to You think this is bad? Jesus is going to be way worse!  And that’s an excellent point on which to end. You see, when you begin with this kind of utterly corrupt reading of the Bible in which neighbors are returned to being enemies who must be dehumanized and otherized, then it will inevitably affect, and indeed corrupt, your Christology. On this retelling, Jesus came merely to introduce a temporary pause in the carnage so that he could prep his army for the eradication of his enemies. And so we see the rotten fruit of genocide apologetics: hatred, anger, callousness, dehumanization, otherization, and violence.