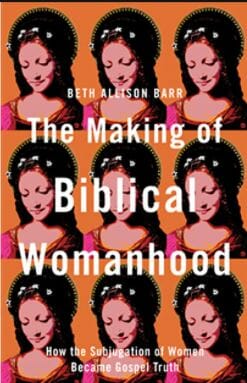 In 2016, Beth Allison Barr’s husband lost his job as a youth pastor, a position he had held for more than fourteen years. The reason? He dared challenge the church’s complementarian stance on women in ministry. The church would not even allow the man to offer a defense of his views in person. In their view, he was capitulating to “feminist culture” and he had to go. Over the next few months, Barr and her family lost close friendships that they had cultivated over years and all because they dared challenge the entrenched patriarchy of one small Texas church.

I suppose we can thank that small Texas church for their hard-nosed stance, for the painful events in the autumn of 2016 ultimately served as a catalyst for Barr, a trained historian at Baylor University, to write The Making of Biblical Womanhood. The book weaves vignettes from Barr’s own painful personal narrative, both with respect to that church and an earlier abusive relationship, along with strands of hermeneutics, theology, and lots of history as befitting a historian’s perspective. And the result is a spirited critique of patriarchy which Barr condemns in no uncertain terms as closely aligned with racism and even countenancing straight-up heresy (more on that anon).

Barr makes some interesting points regarding the question of hermeneutics. For example, she recalls having students read through all the names of women in Romans 16 while taking note of such details as the primacy of Priscilla (v. 3), and the way the patriarchy attempted to cover up Junia’s apostleship (v. 7) and Phoebe’s status as a deacon (v. 1). Needless to say, the prominence of women in leadership positions in the early Christian movement is a stark contrast to the Roman culture of the paterfamilias. It also warrants alternative readings of a passage like 1 Corinthians 14:34-35: Barr suggests the view defended by some scholars that Paul is here quoting a view he himself rejects, an interpretation suggested by the sharp turn in verse 36.

But the real weight of the book, not surprisingly, comes in its historical analysis. Barr skillfully integrates the narratives of several female voices throughout church history while noting the marginalizing ways women have been portrayed (e.g. through tendentiously narrow definitions of ‘preaching’). One of the surprises of the book is how many options there were for women in the medieval period relative to the retrenchment that came with the Protestant Reformation where women were, as it were, ‘domesticated’. Perhaps even more disturbing is the recent deepening of patriarchy among conservative Protestants such as the Southern Baptist Convention and Gospel Coalition. And here we speak not simply of the usual suspects such as Wayne Grudem, James Dobson and John Piper, but also the views of the more winsome and “moderate” voices like Tim Keller and Russell Moore. (For a more in-depth study of the evangelical patriarchy in recent decades, see Jesus and John Wayne.)

I did have one significant disagreement with this book. At one point, Barr flatly accuses gender complementarians of the heresy of Arianism in light of the recent trend of arguing for an eternal subordination of the Son. (The reason this is relevant at all is due to the fact that these complementarians then argue that this provides a model for the subordination of the woman to the man.) I agree that there is a problem here, just not the one Barr thinks. The problem, I would submit, comes when Christians try to use the doctrine of the Trinity, an obscure doctrine by any measure, as justification for various social and/or political programs. And that phenomenon goes far beyond complementarianism. The problem is no less troubling when egalitarians argue that the equality of the divine persons warrants a model of the equality of gender relations. Rather, I would propose a general moratorium on this programmatic pillaging of the Trinity for our pet agendas whether it be complementarianism, egalitarianism, or anything else.

The Arian charge stands out, however, because it is so uncharitable. Arianism is the view that the Son is the first and greatest creation of the Father, a sort of demiurge through which the Father created all other things. For the Arians, there was a time (ontologically if not temporally) when the Son was not. This is indeed a heretical view, but it is very different from the complementarians who argue that the Son, in the divine eternal taxis of the triune God, is begotten of the Father and thus gives all back to the Father: “When he has done this, then the Son himself will be made subject to him who put everything under him, so that God may be all in all.” (I Cor. 15:28) Complementarians do not argue that the Son is ontologically inferior to the Father: quite the opposite, in fact. The whole point is that there is ontological equality even as there is role differentiation.

I don’t make the point due to sympathy with the complementarian position, because I have none. But frankly, I am disturbed when we become so uncharitable toward a position that we disagree with that we are motivated to poison the well by associating the view with heresy. Unfortunately, that is what Barr does here. She is rightly disturbed when the Gospel Coalition attempts to write patriarchy into the Gospel. But it is equally wrong, in my view, to return that insult by arguing that patriarchy is somehow heretical.

While I see the Arianism charge to be an unfortunate one, it should not detract from the overall achievement of this book. The Making of Biblical Womanhood is an incisive critique of patriarchy, one which illustrates the richness of a Wesleyan approach to theological reflection that recognizes the extent to which history and practical experience feed into the process of theological reflection no less than biblical exegesis and hermeneutics. I highly recommend this book.

You can order The Making of Biblical Womanhood here.