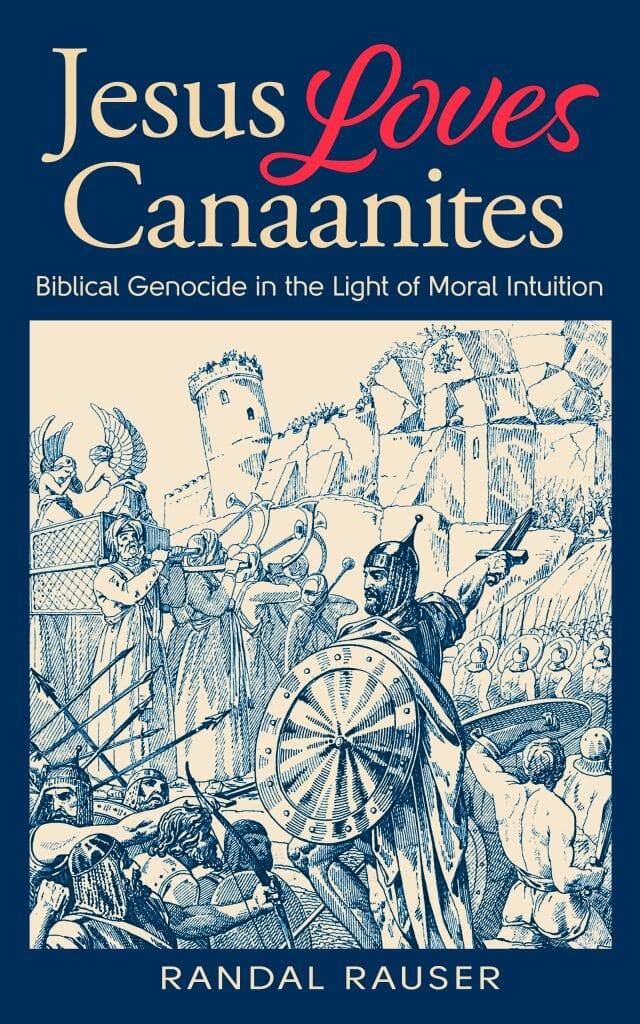 My book Jesus Loves Canaanites has garnered two 1-star reviews at Amazon since its release in April. In this article, I’m going to review the reviews.

If Rauser didn’t claim to be a Christian then you wouldn’t be able to tell by the existence of this book. He presumes to put himself in a position by which he can judge God’s motives and intentions, like an unbeliever, while undermining the thorough through-narrative of God’s sovereignty over his creatures and his right and ability to do with us–all of us–as he wills.
Rauser’s presumptions comes from claims of unjustified moral autonomy, which is essentially moral relativism, that necessarily presupposes moral claims that can only be justified through the revelation found in Scripture.

While a smooth read, his arguments are the arguments not of someone convinced of God’s truth and sovereignty over creation but of an unbeliever who hates the way that God deals with his creatures who are deserving of nothing but his wrath due to their sin. His arguments are fundamentally emotional and laced with subtle and, sometimes, not-so-subtle ad hominem.

There isn’t much to this review, as you can see. Indeed, I am quite sure that this “reader” never actually read the book. After all, he accuses me of endorsing “moral relativism”. Such a characterization is equivalent to accusing the authors of Recovering Biblical Manhood and Womanhood of endorsing “radical feminism”: it’s a patently absurd charge. The book is built on the deliverances of objective moral knowledge. But then, the real important thing to know is that, according to this reviewer, I apparently put myself in a position by which I can judge God’s motives and intentions. The fact that this bloke ends the review by accusing me of committing “ad hominem” is the ironic icing on the cake.

There is a tad more substance to the second review, at least on the surface.

Rauser assumes too much and reads a lot of Western culture into the biblical texts.

There are a lot of assumptions made in this book. Randal Rauser clearly sees the bible through modern western eyes first and does not even attempt to see the bible through the ancient culture from which it was written. He never mentions how ancient views of sin and morality were very different than our western views of justice and morality. Instead he simply assumes that any human being that is forced to do genocide would suffer irreparable mental anguish. He doesn’t show awareness of the ancient Jewish concept of sin and how it was related to disease. The extinguishing of the Canaanites was to prevent the spread of evil or sin, not a simple punishment for sin. Nor was it because of hate against another people, otherwise why would they kill livestock too? They treated sin as a disease and the entire people were infected with this disease including their livestock. Rauser doesn’t show any awareness of this concept of sin. Instead he calls it simply “genocide” reading modern mass killings onto these ancient ones. He intentionally reads the text anachronistically. He purposefully reads the text through modern eyes. He even devotes a chapter to putting the ICC in charge of condemning the actions of Joshua and the nation of Israel. He simplistically concludes that the mass killings described in the Bible are ethnic cleansing and genocide. This is so simplistic. They aren’t necessarily the same. This doesn’t mean we need to accept ancient mass killings as morally good simply because we understand them better, but any book that addresses the topic needs to at least address and understand ancient Jewish thinking. Rauser doesn’t do this at all.

Secondly, Rauser doesn’t address the role culture plays in shaping moral intuition. Instead he just assumes that the vast majority of humans share the same moral intuition. Psychological research has shown that this simply isn’t the case. Moral intuition are not similar to logical axioms, yet Rauser relates them. See Jonathan Haidt’s The Righteous Mind for more on how moral intuitions are formed and why. Even logical axioms have been shown to be influenced heavily by culture. Rauser relies on classical logic without acknowledging that many other cultures do not ascribe to classical logic the way that Western society does. So again, he reads his Western lens on top of the texts without even being aware that he is doing so.

His conclusions aren’t necessarily wrong, but because he didn’t even show awareness of the cultural issues around his claim, both from a biblical textual perspective and a psychological research perspective, this book falls heavily short. His background is in classical philosophy and it shows. He doesn’t understand morality from a psychological perspective or a biblical one at all.

On the upside, this reviewer does seem to have read the book. However, rather than engage with the actual argument I present in the book (the analysis of moral knowledge, the intimate acquaintance model applied to Rwanda, the survey of four major views and critiques of each) the reviewer merely takes potshots. For example, he says I simply assume “that any human being that is forced to do genocide would suffer irreparable mental anguish.” That’s utterly false: I draw upon Dave Grossman’s important work on the psychology of killing in On Killing to show that there is indeed a natural psychological aversion to killing other human beings which does indeed exist in all psychologically healthy human beings. Consequently, as I explain, when people participate in actions like the close-contact killing of genocide, they need to invoke short-term psychological coping strategies such as dehumanizing and othering the victims. (I also reference, among other works, David Livingstone Smith’s book Less than Human where he chronicles the ubiquity of these dehumanizing psychological strategies.)

“The extinguishing of the Canaanites was to prevent the spread of evil or sin, not a simple punishment for sin. Nor was it because of hate against another people, otherwise why would they kill livestock too? They treated sin as a disease and the entire people were infected with this disease including their livestock.”

First off, I discuss this under the concept of herem. Second, I actually give contemporary analogues such as Gleason Archer arguing that the Canaanites were like a cancer. Third, I point out how disease rhetoric is a consistent theme in the othering rhetoric of historic genocides: I give the example of Hitler calling the Jews a “racial tuberculosis” as an example. So the reviewer is both wrong to claim I don’t address the treatment of the Canaanites as disesase and he is doubly wrong to think that dehumanizing people groups as a disease somehow makes genocidal actions morally acceptable.

Finally, the reader claims I don’t “address the role culture plays in shaping moral intuition.” This is a red herring: either my argument is correct and we do have objective moral knowledge about the intrinsic evil of the genocidal eradication of entire peoples (including infants, the handicapped, the elderly) by way of close-contact slaughter or we do not have such knowledge. I provide a case that we do have that knowledge, a case that the reviewer simply refuses to engage. Thus, the reviewer’s entire final criticism is based on moral skepticism and/or moral relativism. What is so frustrating is that he is either too lacking in self-awareness or moral integrity to admit the radically skeptical and/or relativisitic foundation on which he is objecting to my argument.

In the book, I interact with the work of Christian natural law theorist J. Budziszewski who writes: “St. Paul said that the knowledge of God’s law is ‘written on our hearts, our consciences also bearing witness.’ The way natural law thinkers put this is to say that they constitute the deep structure of our minds. That means that so long as we have minds, we can’t not know them.” In Jesus Loves Canaanites I argue that one of the things a properly functioning human being can’t not know is that it is wrong to slaughter infants and children on the pretense that their cultural, ethnic, and/or religious identity is a disease that must be eradicated. The fact that some people like this reviewer, would rather hide behind the equivocation of moral skepticism and/or relativism than accept this undeniable truth simply underscores that my work is far from done.