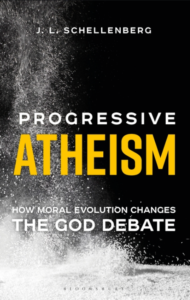 “Atheism, we’ll say, for all we know may come at the beginning of religion rather than the end.” (173)

That is not the kind of quote you’d expect to find in a typical book defending an atheistic perspective. But then again, J.L. Schellenberg did not write a typical atheistic book. Progressive Atheism is a manifesto of innovative and iconoclastic atheist thought in the manner of Ronald Dworkin’s Religion without God.

Practically speaking, this means that Schellenberg is dissatisfied with many conventional atheistic positions. New atheism receives short shrift (and rightly so) as “an activist’s strategy” rather than “an intellectually serious option” (26). And naturalism, while a venerable and intellectually serious position, is nonetheless one which outruns the available evidence:

“Naturalism is an orthodoxy of intellectual culture today, and it is in the spirit of science to resist being constricted by it in our intellectual endeavors. Of course, it’s a huge compliment to science to insist that all of reality can be understood by means of scientific inquiry. But true science is humble, and will refuse the compliment.” (55-6)

Schellenberg’s atheism is, as the title suggests, “progressive”. But what is that supposed to mean, exactly? At the heart of the book lies a conviction that human beings have made enormous progress in scientific, moral, and prudential thinking over the centuries. And this should shape how we think about the God question. The first thing it helps us to see is that the common ways of framing the issue of metaphysical absolutes from within the categories of western monotheism is a historical accident and threatens “spiritual ethnocentrism” (54). We need to dare to think bigger.

But to get to those brighter pastures, we first need to hone the insights of our recent cultural evolution to drive home just how problematic is the traditional concept of God. Over three chapters, Schellenberg launches a series of arguments against the perfect God of western monotheism, i.e. a personal being that is omnipotent, omniscient, and perfectly good. This God cannot be reconciled to the data of experience including the problem of divine hiddenness (chapter 6), the existence of moral horrors (chapter 7) and the ubiquity of violence (chapter 8). A God who is truly the perfect embodiment of the virtues we admire would allow none of these things in the quantity and quality that we find them in the universe. And so, we have a good reason to conclude that this God does not exist.

But then what does exist? The final (and tenth) chapter, “Atheism’s Brave New World” seeks to survey a range of options. We begin with ietsisme, a Dutch term that may be translated “somethingism” (159). In short, while western monotheism may face critical objections, there still must be some ultimate reality. The search for that something more begins by recognizing that this reality would transcend the mundane domain of every day human experience. Furthermore, this reality must be important for human flourishing. Schellenberg suggests calling it “vital transmundanity” (161), a term that I suspect is too unwieldy to ever go viral.

This pursuit of that which transcends the mundane brings us to the concept of “triple ultimacy,” a reality that is the ultimate in terms of its facticity, its inherent value, and its depth of goodness (169). And that brings us back to the quote with which I began this review. It is a mere historical accident that religiosity is linked to western monotheistic religions. In Schellenberg’s vision, a rejection of monotheism may be the first step toward a truer, deeper religiosity as one pursues a greater understanding of the ultimate (non-personal? impersonal?) nature of that which is real.

J.L. Schellenberg is one of the leading intellectuals of contemporary atheistic philosophy. That should hardly be surprising given the ambition and originality of his vision in Progressive Atheism. No surprise, as a Christian theologian there is much with which I disagree in this book. In particular, I find his three arguments for atheism (hiddenness, moral horrors, violence) to be far from persuasive. Nor am I particularly moved by his critique of contemporary theistic philosophy in chapter 9.

But in fairness, Progressive Atheism is not intended as a rigorous and in-depth presentation of argument. Rather, as I said above, I take it as a sort of manifesto, a terse and focused introduction to and defense of a new program, one brimming with ambition and alive with new ideas. When I was doing my doctorate twenty years ago, the analytic philosopher W.V. Quine still dominated conversations. His famous essay “On What There Is,” (The Review of Metaphysics, 2(1) (1948), 21–38) treated metaphysics as analogous to packing for a two-week hike in the Himalayas: only pack what you need. It would be wrong to say Schellenberg has abandoned the basic commitment: after all, ideas still need to pay rent. Nonetheless, the distressingly austere Quinean universe dissolves here into a refreshing openness for a world far more ontologically rich than we can imagine.

I am grateful for Schellenberg’s well-placed critiques of the new atheism, antitheism, and naturalism. And even if I remain unpersuaded by his critique of theism, he definitely lands some punches and provides a valuable catalyst for deeper thinking. But what excites me most about Progressive Atheism is the possibility of dialogue between philosophers — theistic, atheistic and otherwise — who are together committed to pursuing a greater understanding of a world-transcendent reality. It may be too soon to speak of building ecumenical bridges, but Schellenberg’s expansive vision offers far more space for meaningful dialogue with the Christian philosopher than the snarky condescension of new atheism and the Quinean austerity of contemporary naturalism. And for that, I’m grateful.

You can support this website and the author by picking up your own copy of Progressive Atheism at Amazon.com here.

My thanks to J.L. Schellenberg for sending me a review copy of the book.