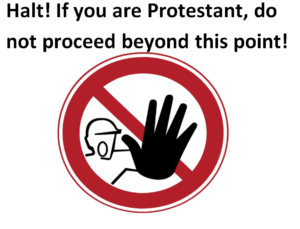 This morning, Taylor Seminary was pleased to host Julien Hammond, the Ecumenical and Interreligious Officer for the Roman Catholic Archdiocese of Edmonton, to speak in our chapel on finding unity among evangelical Protestants and Catholics.

Near the end of his time sharing, Mr. Hammond mentioned the often painful fact that the Catholic Eucharist is closed to Protestants. But he offered an interesting perspective on it.

To begin with, he noted that Catholics likewise normatively refrain from taking communion at other Christian communities (e.g. Anglican; Lutheran; Baptist). Then he pointed out that that this practice of withholding (from offering the sacrament to Protestants) and refraining (from taking the sacrament from Protestants) is not intended as a punitive judgment on these other communities. Rather, it is properly viewed as a self-imposed discipline — a form of fasting — which recognizes through abstinence the lamentable state of Christian disunity and is meant to spur us onto greater unity.

Think about it like this: just as a temporary hunger strike may be undertaken to highlight the need for social change in a particular institution, so intentionally withholding and refraining from partaking of communion between separated churches is a way to underscore the need to work with diligence and intentionality about healing ecclesial fissures.

To be sure, another Christian might reason very differently. They might say: “Why not think that the meaningfulness and beauty of shared communion would itself be a means of healing those very ecclesial fissures?” In other words, from the perspective of this critic, it could be that the practice of withholding and refraining could, ironically, perpetuate the very state of disunity that the practice is intended to address.

Frankly, I’m not sure which of these views is correct. Indeed, I suspect the reality may be more complex: it may be that at times the practice of withholding and refraining as a form of fasting could spur on more intentional work in healing the fissures but at other times, it could function to highlight the fissures and deepen the divides. But I can’t be sure since I am unaware of any “hard data” on this question. And so, we’re left with our intuitions.

To wrap up, my concern in this article is simply to note that recognizing how the practice is intended to be restorative rather than punitive may go some distance toward spurring mutual understanding and respect. In short, may we recognize that whether we share communion or not, we should all be committed to pursuing the unity of being and purpose that Christ desires for his church.