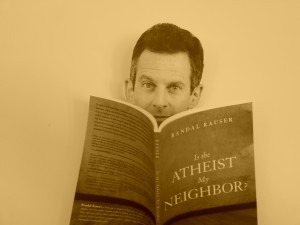 Sam Harris would be much better off if he read my book.

One of my favorite examples of atheist indoctrination comes from Sam Harris (Letter to a Christian Nation, (2006), 51). He begins:

“Atheism is not a philosophy; it is not even a view of the world; it is simply an admission of the obvious.”

Equating your beliefs with “an admission of the obvious” is indoctrinational in nature because it follows that anybody who disagrees with you is, by definition, denying the obvious. And that is a bald way to secure one’s beliefs beyond critical introspection, a crucial first step in indoctrination.

“In fact, ‘atheism’ is a term that should not even exist. No one ever needs to identify himself as a ‘non-astrologer’ or a ‘non-alchemist. We do not have words for people who doubt that Elvis is still alive or that aliens have traversed the galaxy only to molest ranchers and their cattle.”

Apparently, Harris is making the profound point that it’s a historical accident that there are people who say “I’m not a theist.” But so what? It’s also a historical accident that people find themselves saying “I’m not a Platonist” or “I’m not a Bernie supporter.” And yet, here we are: Platonism is a major philosophical position and Bernie’s running for president. So if you end up talking with a Platonist or a Bernie Bro, you might well find yourself distinguishing yourself from their position.

Mutatis mutandis for the self-satisfied atheist who believes it to be an accident that he needs to contrast himself from the vast majority of people who have ever lived. Friend, you really should get out of your bubble and travel the world, both the world of our day and the world of several thousand years of human history. For if there is anyone who would benefit from coming to terms with the idiosyncratic nature of their minority views, it is you.