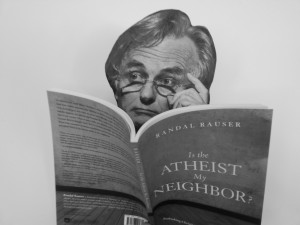 Richard Dawkins taking my advice by reading my book “Is the Atheist My Neighbor?”

Many atheists find the study of God to be equivalent to the study of fairies, that is, a misbegotten enquiry into a fantasy reality. These folk seem to take much satisfaction in invoking this equivalence.

But before they take too much satisfaction, they should realize that many Christians view the study of a world without God in the same light: a misbegotten enquiry into a fantasy reality.

I know that many of those atheists will be shocked to learn this because of the bubble in which they live and the feedback loop they enjoy. So let me unpack the Christian perspective briefly. For example, they find it obvious that something doesn’t come from nothing, that every contingent cause ultimately traces back to a necessary cause, that truth-conducive cognitive faculties must ultimately trace back to a knower who designs cognitive faculties to acquire true and not merely adaptive beliefs, that the extraordinarily complex information in DNA could not plausibly be produced through non-directed processes, that the world is enlivened with objective moral obligations which transcend any created being(s), and so on. To seek a world bereft of the necessary agent cause to explain all these things is as misbegotten and fatuous an exercise as hunting fairies in the garden.

So the Christians look foolish, benighted, and intellectually arrested to the atheists. But the atheists look equally foolish, benighted, and intellectually arrested to the  Christians. At this point, many folks then retreat behind the high rhetorical walls protecting their in-group and have a good laugh at the misbegotten beliefs and projects of the fariyological outgroup. And so, they live in their bubbles and enjoy their feedback loops.

That response breeds a comforting in-group bond and a smarmy sense of self-superiority. Not surprisingly, that can be addictive and so many people remain within the bubble for a long time, like a fetus that has decided the womb is a far more comfortable environment than the world with all its hard edges and sharp corners.

Needless to say, residing in the fortress, remaining in the bubble, lingering in the womb, all this achieves comfort at the cost of impoverishing one’s own understanding of complex reality and the insights to be offered by one’s neighbor.

For those reasons, I would prefer that both sides set aside the rhetorical jabs and attempts to poison the well and instead treat the other’s different perspective with charity, respect, and genuine interest. And that means knocking down the walls, popping the bubbles, wiggling out of the womb, and for goodness sake, tossing all the well-poisoning nonsense about fairies in the garden.