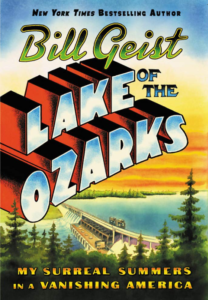 Everybody needs at least one beach read every summer. For 2019, this was mine: author and journalist Bill Geist’s new memoir of working at a summer resort in the 1960s. I picked up Lake of the Ozarks as a way to end off my summer with a shot of literary nostalgia and whimsy in the vein of Garrison Keillor.

This is my first Geist book, and while I can’t say that he is the literary equal of Keillor, the book definitely has its share of nostalgia and whimsy as he narrates working summers at Arrowhead Lodge on Lake of the Ozarks. At times, Geist’s narration approaches the lyrical. Consider this passage where he recounts taking the boss’s speedboat out to the Larry Don, a “barge-like vessel” which would take nightly cruises on the lake:

It couldn’t have been more than a Schlitz or two later that Jim shouted: “Thar she blows, mateys! The USS Larry Don!”

And what a vision it was, ethereal, slowly towing the reflections of its colorful lights that danced on the inky water.

Jim, not one to be enchanted, was. He turned off the engine and we sat there, bobbing slightly, taking in this apparition. What’s more, it was accompanied by dreamy music. Not the rock’n’roll that we relied on at home to transport us to more exiting states of mind. Little Richard, Buddy Holly, and Jerry Lee Lewis were not called for here. The band on the Larry Don was playing “It Had to Be You,” a mellow number for slowly dancing, designed to make you swoon and sway.

Jim pulled the speedboat alongside the Larry Don and tossed a rope to a deckhand. The six of us leaped from the speedboat to the mother ship, into the arms of our colleagues.

They cheered us as heroic partiers willing to do whatever it took.

Dana gave me a big hug and her best kiss yet. “You did it!” she cried. “What an entrance!”

The band played “Put Your Head on My Shoulder” and couples on the dance floor melted into each other’s arms.

The book has several other passages written with an intensity that you can practically smell the pines and hear Paul Anka wafting on the evening breeze.

But it also has some tracts of more pedestrian prose which left me tempted to skim the page. That, perhaps, is what keeps Lake of the Ozarks from earning a place right beside Lake Wobegon.

Perhaps the most interesting aspect of the book is found in the literary tension between nostalgia and reality. Geist recalls working as a bellhop (one of several jobs he performed at the Lodge over eight years) and he notes how, while walking guests to their rooms, he would occasionally be asked about the rank smell of mildew in the lower hall. Geist’s response was to pretend he didn’t smell anything.

After reading Lake of the Ozarks, I was left wondering whether that description was intended to have a deeper thematic significance. The book recollects many charming, dreamy, and amusing recollections of another time. But if you pause, you can smell the mildew. Consider, for example, how Geist notes that this world was largely oblivious to the burgeoning Civil Rights movement, in large part because this region of Missouri was almost uniformly caucasian. In short, Geist observes that nobody was racist because there were no visible minorities to be racist towards: I’m quite sure that was intended ironically. It certainly gives a mildewy taint.

The odor of mildew is discernable in other areas, too. Geist observes how the owner of the hotel, Uncle Ed, flouted labor laws (if there even were any) in firing a lefthanded waitress for holding the tray with the “wrong” hand and in paying several employees a meager dollar a day. But that’s not Uncle Ed’s only sins. He would also toss out paying customers for relatively trivial infractions like taking a watermelon to their room. (“The customer is always right” was unknown at Arrowhead Lodge.) Ed was an alcoholic who downed about a fifth of alcohol a day for decades. And he was also a lecher who hired pretty young waitresses to serve as eye candy and even hid his wife’s ashes on the plane flight home from her funeral so that he could sweet-talk his seat-mate in the airplane.

In short, while Ed may have been a larger-than-life personality, Geist certainly follows Cromwell’s advice: he painted everything, warts and all.

More mildew: at one point, Geist recalls how driving a few miles away from Lake of the Ozarks would bring you deep into a lawless hillbilly country where you could be thrown through a window just for looking at another man’s gal. And when there was an apparent murder in a washing machine at the lodge, the police expended no effort in launching an investigation. As Geist notes, this was not the age of CSI … or even Sherlock Holmes.

I could go on: car seatbelts were for sitting on; the waitresses wore “squaw” uniforms which might escape the 21st-century charge of cultural appropriation due to the fact that they were a caricature unrelated to any actual indigenous culture; and in a world blissfully unaware of such charges as “date rape”, amorous young men regularly plied their dates with beers.

For the most part, Geist seems well aware of the limitations of the era he is romanticizing. Indeed, the examples I noted above seem to be included as his own tacit acknowledgment that the scent of pines is mingled with the odor of mildew.

All of that is true and important. But Lake of the Ozarks remains an unapologetic exercise in nostalgia just the same. And so, while the breeze may be laced with a hint of mildew, you are forgiven for focusing on the intoxicating aroma of pine as the stars twinkle overhead and the band begins to play “A Summer Place.”

You can purchase Lake of the Ozarks at Amazon by clicking here.