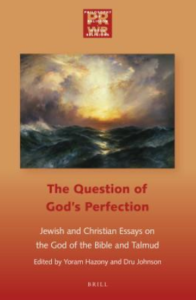 Yoram Hazony and Dru Johnson, eds. The Question of God’s Perfection: Jewish and Christian Essays on the God of the Bible and Talmud. Philosophy of Religion. (Brill, 2019).

The relationship between philosophical reason and biblical revelation has always been a fraught one. At times, warfare has broken out, as when scholars like Blaise Pascal and Martin Buber insisted that the fiery God of Abraham, Isaac, and Jacob is a fundamentally different being from that austere and transcendent God of the philosophers. At other times, a real peace has emerged, perhaps never more perspicuously than at the moment that Anselm concluded the same God revealed to Abraham had bestowed upon the monk-philosopher from Bec a revolutionary insight into the ontology of perfection itself.

Ian Barbour famously offered four models of the relationship between science and theology including conflict and integration. One might apply parallel models to the present debate with some theologians framing the conversation between Abraham and Anselm (or Moses and Maimonides) in terms of conflict while others insist that any surface tension gives way to a deeper congruence best couched in terms of integration.

Within their new edited volume of essays, The Question of God’s Perfection, Yoram Hazony and Dru Johnson aim to bring these two opposing views into fruitful dialogue. The collection of twelve essays is written by a stellar line-up of accomplished Jewish and Christian scholars including Yoram Hazony, Alan Mittleman, Brian Leftow and Eleonore Stump. The book is divided into four sections of three essays each: Challenging God’s Perfection, In Defense of God’s Perfection, Divine Morality, and Divine Attributes.

Hazony and Johnson start off the book with a helpful introduction to the debate over perfection: “Philosophers”, they say, “often describe theism as the belief in the existence of a ‘perfect being—a being that is said to possess all possible perfections…. However, there are reasons to question whether this conception of God’s nature is appropriate as a basis for Jewish theology, and indeed, for religious belief more generally.” (1) What reasons, exactly? Put simply, “The fact is that the God of the Hebrew Bible (‘Old Testament’) does not at all resemble the God that the great debates over God’s existence are all about.”(2) Hence, the question to be resolved: is integration possible or is conflict inevitable?

In my review, I will offer some critical interaction with a representative voice from each side beginning with Hazony’s conflict essay before turning to Stump’s integrationist essay. I will then draw some conclusions on the collection as a whole.

So let us begin with Yoram Hazony’s conflict perspective. Hazony argues that the concept of perfection is rooted in Greek, and specifically Platonic philosophy, which places God in the “realm of immutable and perfect forms.” (11) In contrast to the metaphors in Scripture which are largely based on human beings and other living, dynamic forms (12), “Metaphors such as immutability, impassibility, and simplicity are not drawn from the realm of living things at all.” (13)

Hazony notes that there have been attempts to reconcile these two different portraits, but they tend to grant priority to the philosophical conception of God while marginalizing the Hebrew revelation of God as benighted anthropomorphism (14). Ultimately, Hazony argues that the concept of perfection is not helpful because it requires us to know more of the divine nature than is possible: “It is the sublime that we find in the biblical abstention from attributing perfection to God” (21). In Hazony’s view, when we make ungrounded assertions about perfection we are in danger of the idolatry of creating God in our image.

Hazony makes his case with admirable clarity: in my view, this is one of the best essays in the collection and it provides an excellent introduction to the conflict perspective. However, speaking from the point of view of somebody very much committed to integration, I had several points in response. To begin with, anthropomorphism is inescapable. Few theologians will want to grant, for example, that God is physically embodied, despite repeated references to God’s face, body, finger, throne, et cetera. By the same token, references to God gaining knowledge, changing his mind, or having volcanic eruptions of anger all provide reasonable grounds for anthropomorphic and anthropopathic reading. The question is how much further are we permitted to go and the answer is by no means clear.

As regards the claim that the philosopher’s attributes are not from the realm of the living, I would reply that the Judeo-Christian appropriation of Greek concepts was more critical than Hazony perhaps allows. Consider, for example, the doctrine of impassibility. Far from suggesting the detached prime mover of Aristotle’s imagination, the Judeo-Christian appropriation of the concept produced the exact opposite: a deity who is fully actualized as the most moved mover (to borrow a term that Clark Pinnock errantly directed against impassibility). The impassible God of Judeo-Christian theology is not Aristotle’s God who does not love (or even know) creation, but rather the biblical God who can fully love creation precisely because he does not suffer.

Next, we turn to an essay representative of the integrationist perspective. In her defense of the concept of God in classical theism Eleonore Stump focuses on the theology of Thomas Aquinas. She directly counters the charge that the Thomistic God is static and immutable in a way that contradicts the dynamic, engaged, living deity of the Hebrew tradition. In reply, Stump focuses on the concept of eternity, arguing in particular that the divine eternity should be viewed as representing the fullness of time rather than the negation of temporality (including becoming, change, dynamism, relationship). In this manner, far from being cut off from creation in Plato’s timeless empyrean, God’s eternity suggests that he is most fully present to and in relation with his creatures: “Aquinas’s God is highly responsive to human beings and engaged with them in personal and interactive ways. He is a God who is a particular and personal friend to every person of faith. And he looks very like the biblical God.” (79)

My sympathies with Stump’s argument should be evident given the parallel between her treatment of eternity and my treatment of impassibility. At this point, my primary complaint is that she does not go far enough in bringing her analysis into fruitful dialogue with the conflict theorists and their specific concerns. For example, a conflict theorist might concede that a sufficiently elaborate metaphysic can, in principle, offer a putative resolution of these two very different perspectives. Nonetheless, they may still view Stump’s analysis as constituting the mere addition of epicycles to a fundamentally unworkable theory. Far better to set aside the Greek suspicion of time and change than attempt to reconcile it to the living, breathing, and straight-forwardly temporal entity of the Hebrew Scriptures.

My concerns about Stump’s essay bring me to what is arguably the most important weakness in the work: namely, the relative lack of substantive interaction between the conflict and integration perspectives. Time and again I found myself wondering how the theorists of each camp would respond to the points made by the other side. To that end, the book would have been greatly enriched by the kind of direct engagement between contributors that one finds, for example, in Zondervan’s Counterpoint series.

Second, it would be valuable to have an explicit discussion of the role of intuitions in framing our understanding of perfection and related concepts, not least because intuitions about perfection inevitably shape the way we read texts like Ezekiel 16 (i.e. the portrayal of God as a homicidally enraged husband). To what degree do all readers appeal to a priori intuitions of perfection and goodness in their reading of scripture? Personally, I suspect these appeals are more widespread than some conflict theorists recognize.

As you can probably surmise, my suggestions for a more productive dialogue favor my own integrationist view. So take that for what it is worth. Regardless, even if The Question of God’s Perfection does not achieve the cross-fertilization of perspective for which I might have hoped, it is nonetheless an important new collection on a critically neglected topic. As such, it is a must-have for professional theologians, philosophers, and university libraries. I should add that the book is, for the most part, surprisingly accessible for the seminarian or motivated upper-level undergraduate. But unfortunately, the relatively high $75 price-point will be prohibitive for many potential readers. That is an unfortunate reality of academic publishing. At the very least, I would encourage interested readers to request their local library purchase a copy. The Question of God’s Perfection may not be perfect (sorry, I couldn’t resist), but it is nonetheless an essential contribution to an oft-overlooked front of interdisciplinary debate.

Thanks to Brill for kindly providing me with a review copy of the book.

You can order The Question of God’s Perfection here.