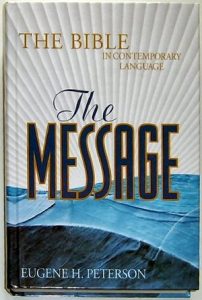 Today I watched the first two episodes of the 2016 television series “The Exorcist” before I lost interest. As a result, I was mulling over the lost opportunity that this series represents. And along the way I started wondering, if you were performing an exorcism and you cited The Message, would it work? And if not, what would that say about The Message?

(Of course, the question is predicated on the assumption that exorcism involves actual spiritual agencies rather than misbegotten attempts to diagnose and treat physiological and psychosomatic conditions. Reader who are not willing to grant that assumption, even for the sake of argument, should probably stop reading now and instead go and check Trump’s latest offensive tweet.)

Is The Message a better Bible than the KJV for the contemporary reader? Maybe.

The King James Version will always be a literary classic. But as a translation it becomes more obsolete every year due to the changing meaning of language, the discovery of new manuscripts, developments in linguistic understanding, translation philosophy, etc.

As for The Message, it famously utilizes a highly dynamic translation philosophy (in contrast to the word-for-word approach of the KJV). As a result, people tend to label it a “paraphrase”. (Technically this is incorrect since Peterson translated from the original languages while paraphrases are reworkings of preexisting translations.) Regardless, the fact that The Message foregoes “Biblish” and “Christianese” phrasing for common language has won it many readers. And in many respects that earthy approach has resulted in a product that, for the modern reader, is closer in tone and meaning to the original texts.

Is the KJV a better Bible for an exorcism than The Message? Probably.

While The Message may be a more effective Bible overall for the contemporary reader than the old KJV, I know which one I’d sooner bring to an exorcism. But I’m not sure why.

Consider a comparison on one verse, 2 Timothy 1:7:

KJV: “For God hath not given us the spirit of fear; but of power, and of love, and of a sound mind.”

The Message: “God doesn’t want us to be shy with his gifts, but bold and loving and sensible.”

Okay, in this case I prefer the KJV. But even so, there is a case to be made for each translation. For example, the Greek word deilia that the KJV renders as “fear” can also be plausibly translated with The Message’s focus on shyness since the word’s lexical range includes timidity.

Nonetheless, when it comes to Regan MacNeil levitating in front of me, I’d much rather cite the KJV. Of course, my preference is probably due to the fact that as a reader I’ve learned to identify the KJV Biblish and Christanese phrasing with inspiration and authority which The Message lacks.

But that doesn’t change my mind. I’d still rather take the KJV, even if it turns out that verse for verse The Message is a better translation for today.

Footnote: As I was writing this article the Eagles song “One of these nights” was playing in the background. And just as I wrote the sentence about Regan MacNeil from The Exorcist levitating, Don Henley sang “you got your demons”.