Intellectual development involves, among other things, the increased ability to analyze the views of others with critical nuance and charity. At its most sophisticated level, that trend includes the skill of rigorous devil’s advocacy, i.e. the ability to defend the views of others with as much sophistication and putative conviction as genuine advocates for the position.

By contrast, intellectual regression involves, among other things, a retreat from that ability to analyze the views of others with critical nuance and charity, most perspicuously in that rigorous devil’s advocacy.

While atheists love to indulge in the rhetoric of “reason,” it is ironic that they so frequently celebrate the deeply irrational process of intellectual regression. Consider, for example, this tweet (which I first encountered as a Counter Apologist retweet):

"The longer I have been an atheist, the more amazed I am that I ever believed Christian notions." – @DanBarkerFFRF pic.twitter.com/Ko0ub12CAc

In this quote Dan Barker states that the longer he is an atheist, the more amazed he is that he was ever a Christian. Amazement of this sort entails the loss of ability to analyze Christian beliefs with critical nuance and charity, most perspicuously in rigorous devil’s advocacy. After all, if Barker retained those skills, he would not be amazed because he would understand perfectly well why and how perfectly reasonable and intellectually sophisticated people continue to be Christians. Consequently, Barker’s “amazement” cashes out to a loss of intellectual skill, and thus a de facto celebration of intellectual regression.

As I said, this is not only unfortunate, it is ironic for atheists who regularly indulge in the rhetoric of reason. It’s like a person who was a onetime cosmopolitan world traveler celebrating their regression into ignorant, provincial attitudes.

But is it possible that we’re not being fair to Barker’s quote in context? That’s a perfectly reasonable question to ask. Let’s take a look at the wider context in which the quote appears from Barker’s book Losing Faith in Faith (p. 106): 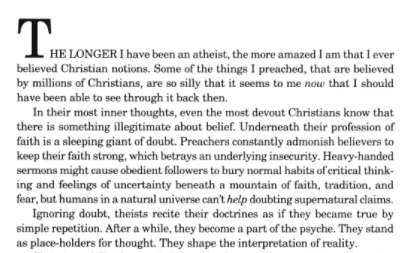 If anything, the wider context is even worse. Not only is Barker “amazed”, but he dismisses Christian beliefs as “silly”. Indeed, he even goes on to impugn Christian intellectual honesty: “In their most inner thoughts, even the most devout Christians know that there is something illegitimate about belief.”

This charge is the atheist’s equivalent of Christian claims that deep down atheists really do believe there is a god. Each is an uncharitable case of arm chair psychology in which an outgroup is diminished and marginalized with the claim that each member of the group is, in some sense, faking it. (For my critique of Christians engaging in this behavior, see my book Is the Atheist My Neighbor?)

The good news is that we can say with confidence that Atheist Republic is not misrepresenting Barker’s views in this tweet. The bad news is that both the tweeted quote and the original passage in which it occurs are bald examples of the retreat into the ignorant and provincial.