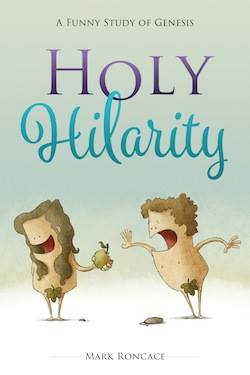 I was a big fan of Mark Roncace’s previous book God’s Story. I also very much enjoyed Raw Revelation (albeit with some reservations). So when he offered to send me a review copy of his latest popular study, Holy Hilarity, I welcomed the opportunity.

As the subtitle stipulates, Holy Hilarity aims to be a “funny study of Genesis,” one that consists of 53 short chapters and 220 pages. At the outset we should be clear that the primary aim of the book is not to provide a study of the humor in Genesis (thought it occasionally does so). Rather, it is to provide a humorous study of Genesis. As Roncace puts it,

“That’s the aim of this book, plain and simple: to help you meaningfully engage the Bible with merriment. I want you to laugh out loud and have a rockin’ good time as you contemplate the rich stories of Genesis.” (vii)

“Who is the audience?” Part 1: The Millennial?

It’s a noble goal: everybody loves to laugh, right? (Make that everybody except Grumpy Cat.) But that doesn’t mean everybody is automatically going to be interested in a funny study of Genesis. In short, every author must contend with this question: who is the intended audience of your book?

In the case of Holy Hilarity one of the endorsements on the back commends the book as “an entry into the biblical texts for a generation raised on Jon Stewart, Stephen Colbert, and Samantha Bee…”

Yeah, I don’t see that for a couple reasons. First, I don’t think a savvy and cynical millennial who relishes the progressive, sardonic social commentary of Samantha Bee or Jon Stewart is going to be attracted to a cover that looks straight out of flannel-graphs and vacation Bible school. (In my opinion, the cover of Holy Hilarity is a major misfire.)

And it’s going to take more than a promise of jokes to attract the millennial to a study of Genesis.

Second, I don’t think much of the humor within the book is going to land with a millennial audience. The fact is that a significant portion of Roncace’s material would be classified as dad jokes. And dad jokes are a dicey matter. The best of them are good because they’re so bad. The worst of them are just bad. (I know this well because I myself am an endless repository of lame dad jokes and I have a merciless teenage daughter to separate the wheat from the chaff. And it’s mostly chaff.)

Here is one of Roncace’s lamer attempts at humor, this one commenting on the impact of the fall on Eve:

“The woman’s punishment is nothing to scoff at either: pain in childbirth and, even worse, ‘your desire will be for your husband and he will rule over you.’ If only God had said ‘drool over you,’ how different our world might’ve been–if a little slobbery.” (15)

The danger with dad jokes is that if they are poorly executed they can quickly alienate an audience, especially a cynical millennial audience. So I don’t think Holy Hilarity will find its primary readership here.

“Who is the audience?” Part 2: The Conservative?

I don’t think so. And the reason is that Roncace’s humor is often too risque for a conservative Christian audience. Consider the following examples.

To begin with, Roncace offers the following lighthearted rumination about God’s rainbow promise not to flood the earth again: “The rainbow reminds me personally of gay pride, which makes me think God’s multi-colored sign might have something to do with the diversity of life on our planet.” (37)

Believe me, the suggestion that the rainbow of the Noahic covenant could be linked to LGBT diversity is not the way to get a group of conservative Christians to bust a gut.

Next, Holy Hilarity highlights the many awkward sexual situations in Genesis. But Roncace’s humor here is likely to further alienate conservative readers. For example, he offers the following jovial take on the plagues of Egypt: “God then intervenes by afflicting Pharaoh and his household with ‘great plagues.’ Probably gonorrhea.” (52)

Ouch! Once again, that is not the way to get a group of conservative Christians to laugh. (It does remind me, however, of Larry Norman’s reference to “Gonorrhea on Valentine’s Day” from his hard-hitting 1972 song “Why Don’t You Look Into Jesus?”)

Even worse, when it comes to the destruction of Sodom, Roncace cracks an erection joke, opining that “it’s never good to ‘pitch your tent’ near a place called Sodom.” (56) Oh dear. And then there’s the passing reference to “twerking” (24) and the phallic interpretation of the Tower of Babel (44), and the allusion to Viagra (72).

In short, I don’t see Roncace’s take on Holy Hilarity being welcomed by a conservative Christian readership. And I definitely don’t see it appealing to the millennial. Thus, whatever other virtues the book may have, it seems to lack a ready audience.

Let’s turn now from the question of audience to highlight some of the admirable virtues of the book. Roncace is at his best when he uses humor to offer wry commentary or highlight difficulties within the text.  For example, when he recounts how God provided verbal instructions to avoid the Tree of Good and Evil, he observes “God should’ve put the command in writing. After all, people never misinterpret the written word of God.” (14) That’s a fine use of sarcasm.

And without ever explicitly challenging a simple literal hermeneutic of all the stories in the text, Roncace gently prods at the plausibility of such an approach. Consider his comments regarding life on Noah’s Ark:

“I bet he [Noah] was really worried about the woodpeckers and termites, and he probably wasn’t sure what to feed the carnivores. Nor did God mention taking beverages. Maybe they were supposed to catch the rainwater? But the two elephants alone would kill that idea–drinking sixty-five gallons a day.” (25)

Roncace wisely offers no resolution here, instead simply allowing the reader to sit with the incongruity.

One of the many difficulties with the narrative consists of the great age of many of the characters. Roncace provides this take on Sarah’s advanced age (i.e. in her early nineties) when she finally gives birth to Isaac: “Nursing is inevitably taxing on the mother, especially if you are as old as Sarah, and hence buying Huggies and Depends at the same time.” (94)

This leads me to what is perhaps the greatest virtue of Holy Hilarity. It’s an honest take on the difficulties of the text. What is more, it is based on the recognition that the difficulties in the text are providential, that we as readers benefit by wrestling with those difficulties.

This is hugely important. As I’ve lamented in the past, Christians have some common ways of dealing with various difficulties (in particular moral and cultural) within the text. I’ve identified four in particular: omission (we simply ignore problematic details), distraction (we change the topic, often by focusing on some incidental general principle), misrepresentation (we subtly distort details), and blunted affect (we recount troubling details with a flat emotional disposition unbefitting to the content). While these various reading strategies follow a path of least resistance, they thereby inoculate the reader from the full force and challenge of the text.

When Roncace highlights violence, misogyny, favoritism, selfishness, and other ignoble aspects of the characters and their conduct, he is aiming to push readers beyond these various strategies to confronting the difficult realities of the text. For example, when it comes to Jacob, the most complex human character in Genesis, Roncace does not shy away from highlighting his tendency toward selfish concern (155), his penchant throughout his life to show favoritism (206) and even his final apparent descent into dementia (210).

The resulting portrait of Jacob fits poorly with the popular conservative Christian tendency to reduce the Old Testament to a collection of character studies that highlight various virtues of the Christian life. Instead, we get a complicated, challenging, and morally difficult character which invites us to examine our own lives to find similar flaws … and God’s work despite those flaws.

Humor: The Best Way into the Text?

While I would commend Holy Hilarity for the aforementioned virtues, this does bring me back to Roncace’s use of humor as a way to frame a somewhat subversive devotional study of Genesis for a lay audience. In short, I find that while humor sometimes effectively serves the task, at other times it becomes a distraction. Case in point: the bad dad jokes and gratuitous allusions to erections and Viagra.

The focus on levity works best in those moments when Roncace is highlighting ambiguity, irony, or morally troubling aspects from within the text and allowing us to draw the connection to our own lives.

Nonetheless, overall I think the book would have worked better if it had refocused on conveying an honest and challenging study of Genesis while allowing humor to be one of many tools to engage the reader with the text.

It turns out that God has a sense of humor too

Finally, we can conclude with a surprising and unintended example from the text of God’s own penchant for mirthful irony.

When recounting the Noahic narrative, Roncace appeals to some cutting illustrations at the expense of the long-suffering Chicago Cubs. (Infamously, the Cubs last won the World Series in 1908.) And so when recounting that Noah and the animals spent approximately seven months in the ark after the floodwaters had receded, he opines, “The probably felt longer than Cubs fans waiting for a World Series.” (32) Ouch!

A couple paragraphs later, Roncace twists the knife by noting that Noah’s sacrifice of animals who had just survived the flood is like “betting on the Cubs at the beginning of the season to win the World Series, only to watch them blow a 22-0 lead in the ninth inning of game seven.” (32-33) Wow, that hurts.

I trust you know where this is going: the Cubs went on to win the World Series in November 2016, a few weeks before Holy Hilarity was published, and long after any changes could be made to the galleys of the text.

Yes, it turns out that God has a sense of humor too.

You can order Holy Hilarity here.