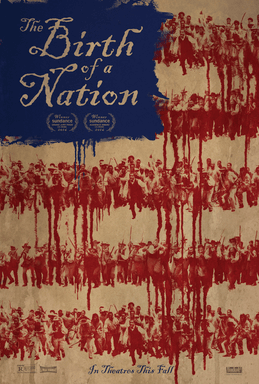 Things started out promising for Nate Parker’s 2016 film The Birth of a Nation. The film tells the story of Nat Turner, a slave preacher who led a fated slave rebellion in 1831. The movie took the 2016 Sundance Film Festival by storm, winning critical and popular praise along with a stunning $17.5 million payout from Fox Searchlight Pictures for the worldwide distribution rights. By February it seemed to many that a major Oscar contender had already emerged.

Then things began to go downhill. Much of the media hype and popular calls for boycotts focused on charges Parker had faced for an alleged 1999 rape. Parker was later acquitted of the charges, though many critics were keen to point out that “not guilty in a court of law” is not the same as “innocent.”

The worry I have is with many of those protesters concerns consistency: I wonder, how many of those who advocated boycotting Parker’s film would still watch a Roman Polanski or Woody Allen movie? How many would listen to a Michael Jackson song? And William Golding, author of Lord of the Flies, once revealed that as a young man he tried to rape a 15 year old girl. Should we now banish that book from junior high reading lists?

Which crimes of the past are worth boycotting an artist’s work? Rape is, apparently, as is alleged rape. But what about attempted rape? Murder? Attempted murder? Embezzlement? Physical assault? Burglary? Drunk driving?

I admit it is probably unreasonable to expect that folks will have a precisely worked out framework by which they decide which crimes are worth a boycott. But if they’re going to lead a morally indignant boycott of Parker, shouldn’t they at least try to embed it within a broader theoretical framework? Frankly, many of the attacks on this artist remind me of the low brow mob dynamic chronicled in Jon Ronson’s book So You’ve Been Publicly Shamed.

The basic plot of The Birth of a Nation is riveting and rich for theological and ethical reflection. A charismatic and brilliant young slave boy who learns to read, masters the Scriptures, and becomes a dynamic preacher; as Nat’s reputation grows, his slave master begins to rent his services out to other plantations with the express mandate of preaching a message of compliance to their slaves. As you can guess, a disproportionate number of Nat’s sermons focus on texts like 1 Peter 2:18-20:

“18 Servants, be subject to your masters with all fear; not only to the good and gentle, but also to the froward. 19 For this is thankworthy, if a man for conscience toward God endure grief, suffering wrongfully. 20 For what glory is it, if, when ye be buffeted for your faults, ye shall take it patiently? but if, when ye do well, and suffer for it, ye take it patiently, this is acceptable with God.” (KJV)

It doesn’t take long for Nat to sense an internal conflict with his role propping up a system that feeds uncontrolled barbarism: for example, right before one sermon Nat witnesses the slave owner force feeding a slave by knocking out his teeth with a chisel and then sticking a tin funnel filled with slop into his mouth. Moments later the slave pukes out a mouthful of blood, slop, and teeth. Now time for the call to worship.

In one powerful moment Nat unmasks this pro-slavery reading of the Bible. Here is the scene in the screenplay: 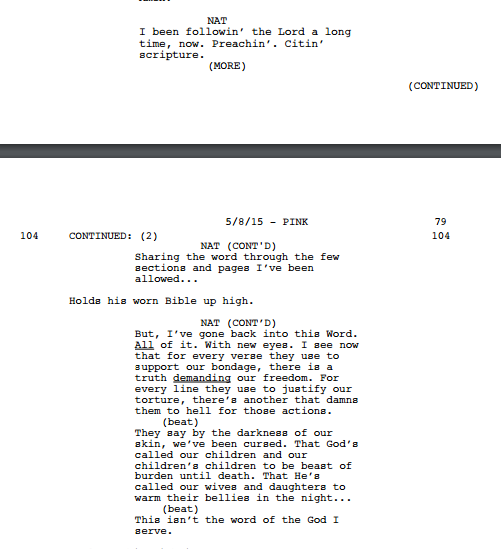 What follows is a brief and doomed rebellion as Nat leads several slaves to take up arms and kill their oppressors before he faces a fate which calls to mind (to my mind, anyway) William Wallace’s execution in Braveheart.

The great strength of the film is found in laying out this story in broad strokes as it explores the interpretation and appropriation of Scripture in various cultural contexts and the ethical challenges of responding to truly evil systems of repression.

I said above the the fortunes of The Birth of a Nation began to fall after its triumphant debut at Sundance. The rape charge may have garnered the most attention, but as regards the film itself the bigger issue concerned historical accuracy. Many critics have observed that Nate Parker avoids depicting the rebellion’s genocidal targeting of women and children.

To be sure, there is a hint of that carnage in the film. In one pivotal scene Nat is depicted ruminating on 1 Samuel 15:3 in which Saul is tasked with the indiscriminate slaughter of Amalekite men, women, and children. But that is perhaps the strongest hint of the unspeakable atrocities carried out by Nat and his fellow rebels against women and children. The carnage of the rebellion focuses instead on the fate of the direct oppressors.

This is really unfortunate. The film would have been far more interesting if it had shown the courage to depict the full range of atrocities committed by the rebels. I can’t help but wonder if Parker (who wrote the screenplay, directed the film, and starred as Nat Turner) grew too close to his subject matter.

There is another aspect to the history that the film skirts and that is the notion that Turner’s rebellion was born primarily of religious visions. The Nat Turner depicted in the film seems to me more like a Marxist revolutionary who seeks to unmask the cynical and exploitative use of Scripture to prop up a system that oppresses an underclass. But history suggests that Turner’s rebellion was borne more by mystical revelations of the divine will. And that is an uncomfortable fact for those seeking to plumb this story for contemporary socio-political commentary. (For that task I would instead recommend the excellent documentary 13th.) The story of Nat Turner and his ill-fated rebelion is complicated and deserves to be told on its own terms rather than appropriated by various special interests.

If these are flaws in the film–and they surely are–I would nonetheless hasten to add that they are not fatal. This is a powerful and thought-provoking cinematic retelling of an under-reported event in American history.