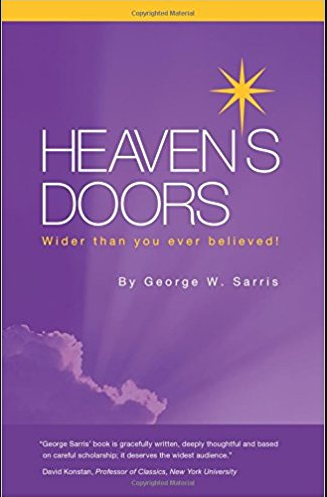 Though he has long been a great defender of the traditional doctrine of hell, J.I. Packer once conceded: “If you want to see folk damned, there is something wrong with you!” That statement has always stuck with me because it implies every Christian should hope universalism is true even if they believe it is false.

But should they believe it is false? George Sarris seeks to challenge that belief in his new book Heaven’s Doors: Wider than you ever believed! At first blush, Sarris is a surprising defender for universalism. He is neither an old school liberal nor an emergent/emerging hipster. Nor, for that matter, is he the kind of Eastern Orthodox theologian who defies the simplistic liberal/conservative continuum so beloved in the West.

Rather, Sarris is a traditional conservative evangelical and his credentials in this regard are impeccable. Don’t believe me? Well consider this: he is the voice narrating Zondervan’s audio edition of the NIV. You don’t get more evangelical than that!

Universalism in the Early Church

Like any good evangelical, Sarris takes the Bible seriously. But when it comes to the nature of hell, he believes a majority of Christians have misread its teaching for a very long time: approximately fifteen hundred years, to be exact (204). That’s quite the claim, and Sarris devotes several early chapters to arguing that universalism was the dominant position in the early church. To make his case he appeals to several theologians including Clement of Alexandria, Origen, Gregory of Nyssa, Theodore of Mopsuestia, and others. He also notes the notable silence of major creeds and ecumenical councils on the topic of hell.

All that began to change under the long shadow of Augustine who, Sarris argues, was the first great defender of eternal conscious torment. A century later, Emperor Justinian took up the cause, targeting universalism while helping to establish the hegemonic dominance of eternal conscious torment on subsequent debate. That hegemony has been maintained down to our own age.

I have some quibbles with aspects of Sarris’ historical theological work. For example, he fails to acknowledge the extent to which Platonism impacted Origen’s entire theological project. This seems a notable oversight since Sarris appears to marginalize the relative popularity of eternal conscious torment during the intertestamental period because it is sourced in “pagan writers” (31). But then might one dismiss Origen to the extent where his views were shaped by an architectonic Platonic framework? (For my money, I’d want to challenge the the whole underlying assumption: nonbiblical origin does not mean unbiblical, let alone unChristian content.)

Regardless, we must not miss the wood for the trees. At the very least Sarris provides a strong case that with the exception of Tertullian, Augustine, and the northern African church, universalism was widely considered to be a fully orthodox position in the early church. And that in itself is a very significant point.

This matters greatly because evangelicals frequently dismiss universalism by stamping it with the oft used (but rarely understood) stigma of heresy! The practical implications of this assumption are hammered home in the book as Sarris recounts how he lost friends, was fired from a ministry, and was even asked to leave his church all because of his commitment to Christian universalism.

What’s most disturbing about this is not the charge of heresy itself so much as the fact that it is regularly given in lieu of any conversation or analysis. The assumption seems to be that once you’ve labelled something “heresy”, you don’t need to worry about the arguments for it. As a case in point, Sarris recounts an instance where a friend asked his pastor to read Sarris’ manuscript. Initially the pastor agreed, “but after receiving a copy, [he] made a casual remark about it being heretical and said he wasn’t interested.” (82)

Time and again Sarris encounters the same response (e.g. 74, 104). How different that closed-minded attitude is from the Bereans who, when confronted with the extraordinary messianic claims of an itinerant evangelist, “examined the Scriptures every day to see if what Paul said was true.” (Acts 17:11) Sadly, I suspect Paul would never get a hearing in many evangelical churches today.

Yet, doesn’t Scripture clearly teach that some people will be lost forever and endure an eternal punishment? Not according to Sarris, and he devotes three chapters (8-10) to a careful consideration of these issues. The problem, as Sarris rightly notes, is that too often the reader is left with questionable English translations and a background eternal conscious torment interpretive framework. But once we get beyond those barriers, Sarris believes we will find the texts saying something very different.

Sarris begins in chapter 8 by discussing the Hebrew term Sheol and the related Greek term Hades. While these terms sometimes are taken to be referring to hell (most notably in the Parable of Lazarus and the Rich Man in Luke 16:19-31), they in fact refer to the realm of the dead where people go immediately following death and prior to the general resurrection and final judgment.

Next, Sarris devotes chapter 9 to discussing references to Gehenna and Tartarus. Here he focuses in particular on Gehenna, arguing that a close analysis of the term in its literary and historical context simply does not support the doctrine of eternal conscious torment. But it is consistent with the image of fire as a purgative/cleansing agent.

Chapter 10 is devoted to two terms commonly translated as “eternal” or “forever” (olam, Hebrew; aion, Greek). Sarris argues that the terms are likely referring to a future period of indefinite (but most certainly finite) length. As for the related term “punishment” (kolasis, Greek), Sarris argues that the term should be understood as a punishment for rehabilitation/restoration rather than merely retribution. The conclusion is that verses like Matthew 25:41, 46 should be taken as envisioning a future indefinitely long period of restorative punishment rather than a never-ending punishment of retribution.

The final three chapters explore the nature of judgment and some remaining biblical and practical issues. There are several fascinating sections in these chapters. For example, Sarris addresses Jesus’ declaration that it would be better if Judas had not been born (Matthew 26:24; Mark 4:21). In fact, Sarris argues that we’ve misread the text because we’ve misread the pronouns. The actual meaning is not that it would be good for Judas if he hadn’t been born, but rather that it would have been good for the Son of Man:

“In that context, Jesus was not saying that it would have been better for Judas if he had never been born. Rather, Jesus spoke of His grief concerning the disciple who was about to betray Him, and in the process expressed His desire that it would be good for Jesus if Judas had not been born.” (187)

That was an interesting take on a text that I hadn’t encountered before.

Heaven’s Doors has many strengths. It is clearly and accessibly written with a minimum of technical verbiage (i.e. unnecessary big words!). And Sarris is a good communicator. I particularly appreciated his helpful explanation of the contextual function of the Greek word aion replete with clear analogies. Two hundred pages provides much food for thought, and the book is written with a general readership in mind.

I did have a couple disappointments. To begin with, while Sarris discusses dozens of Scriptural passages throughout the book, most of the textual references are consigned to the endnotes. As a result, there are several cases where one must flip to the end of the book to discover which biblical text Sarris is discussing. It would have been far more sensible and user-friendly to include all scriptural references with in-text parenthetical references.

Second, Sarris devotes surprisingly little attention to several texts that have long been claimed by universalists including Acts 3:21, Romans 5:12,  Philippians 2:11, Colossians 1:20, and Ephesians 1:10. I found it ironic that so much time should be spent (albeit well spent) on critiquing traditional eternal conscious torment texts, but comparatively little should be devoted to strengthening the case with these prima facie universalist texts.

Though I have oft defended the hope of universalism, I’m not a universalist by conviction. But I have no doubt that Sarris is a deeply committed evangelical Christian and in Heaven’s Doors he has presented a well researched and eminently readable case that is well worth considering. So if you’re interested in this topic — and if you’re a Christian then you should be — then I suggest you be a good Berean: pick up a copy of Heaven’s Doors, and examine the Scriptures for yourself to see if what George Sarris says is true.