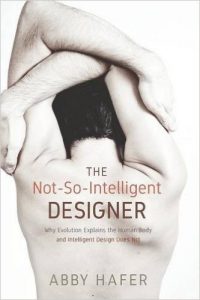 If you love intelligent design, you’ll (probably) hate this book.

If you hate intelligent design, you’ll (probably) love this book.

I initially requested a review copy of Abby Hafer’s The Not-So-Intelligent Designer because I’m interested in the concept of a kluge. A kluge is, a “work-around” or “an ill-assorted collection of parts assembled to fulfill a particular purpose.” If evolution is true, one should expect to find kluges throughout nature. And that is what one does, in fact, find: imperfect structures and systems which work well enough but which are very far from ideal. Given the title of this book I assumed that Hafer would be discussing the concept of a kluge.

Not exactly. Hafer never uses the term “kluge,” preferring to focus instead on the broader category of “bad design.” While some of the ten examples Hafer cites are kluges (the eye, for example), others are not. For example, she discusses the appendix, an organ which she says has no purpose at all. It turns out that that may not be true. But regardless, Hafer understands the appendix to be vestigial and thus not a kluge.

So Hafer’s vision is wider than my original interest. But that’s not a bad thing. Indeed, for the most part I quite enjoyed her engaging and wry survey of so-called “bad” designs, ranging from the vulnerable placement of the human male’s testicles to the blindspot in the human eye.

The Designer and God

But why think this? Presumably that depends on the skills and intentions of the designer. Throughout the book Hafer assumes that the designer in ID theory is God. It’s ironic that she is so confident ID theorists all believe the designer is God given that she repeatedly insists that ID theorists can agree on hardly anything, perhaps not even gravity. So what basis does she have to believe unanimity exists on this point?

There are at least two problems with Hafer’s assumption. First, ID theorists insist that one cannot invoke God as part of the design inference, even if one is a theist who believes God is the designer. Qua the theory, one can only invoke a cause sufficient to explain the effect in question and the traditional attributes of deity (e.g. omniscience, omnipotence, etc.) are not required as explanatory posits. So the ID theorist cannot appeal to God as the designer. This point is stated ad nauseam in ID literature, so I can’t help but suspect that Hafer reveals a willful ignorance on the point.

Second, Hafer overlooks the crucial fact that some of the leading proponents of ID theory including Steve Fuller, David Berlinski and Bradley Monton are atheists/agnostics. While these scholars are supportive in principle of ID theory, they are not yet persuaded that a design inference is warranted; nor would they necessarily believe God was the designer should that inference become justified.

Unfortunately, Hafer’s confusion on ID is not limited to the identity of the designer. Hafer also misrepresents the relationship between ID theory and evolution. While she notes in passing that leading ID theorist Michael Behe accepts common descent, including the common ancestry of humans and chimpanzees (21), she conveniently sets this fact aside for the bulk of the book and instead frames the debate as one between ID and evolution simpliciter. To be sure, many advocates of ID reject various aspects of evolutionary theory, but that opposition is not a part of ID theory itself.

Hafer makes much of the Discovery Institute’s infamous Wedge Document and its stated opposition to scientific materialism. And what is scientific materialism? Hafer writes that the Discovery Institute means “believing in the material world. If you only accept evidence from the material world, evidence like things you can actually see and hear, then according to ID proponents you are a ‘materialist.'” (30) This is an absurd definition. ID theorists are opposed to ontological materialism and methodological naturalism, and neither concern bears any relationship with this gobbledygook description.

Hafer insists that ID is not science. And to drive the point home she does an interesting word study of ID literature to show that it uses terminology more in keeping with theology and philosophy than science (see chapter 28). This is exactly right, and it’s a point I’ve sought to make for quite a while now. Unfortunately, Hafer doesn’t understand the significance of the point.

Here’s the lesson: ID theory is not science. But it is a philosophy of science. The ID theorist objects to methodological naturalism’s exclusion of intelligent causes from the tool box (to use Paul Nelson’s metaphor) of scientific explanation. And they give examples where inferences to intelligence are already invoked in scientific explanation. Perhaps the most well known example is SETI research. In recent years the search for planets has revealed another interesting example: the possibility of detecting a Dyson Sphere.

Conflating ID with the Discovery Institute

Hafer’s book is a blistering polemic punctuated by sardonic humor. That makes for entertaining reading, especially for those who already have it in for ID. But it is not the place to find nuanced and charitable engagement. Having collapsed ID into the Discovery Institute and reduced the Discovery Institute to the equivalent of the amoral tobacco lobby, she has no time, patience, or interest in considering the academic work of its leading scholars.

The book commits several logical fallacies. As you might have guessed, strawman is one of them.  Hafer repeatedly caricatures ID positions as in the fallacious description (cited above) of scientific materialism. The following passage provides another good example of strawmanning:

“ID folks often like to talk about probability. They say that getting the organisms we have today by way of random mutations followed by natural selection is too improbably to be true. They point out that the odds of getting any particular organism are exceedingly small, and therefore they claim that evolution is impossible.

“This is like saying that because the odds of your being born are exceedingly small, given that your two parents had to meet and reproduce on just the right day to have that particular sperm and egg meet that later became you, and given that the same thing had to occur for all the generations before you, these odds are extremely small, and this somehow means that it is actually impossible to that you were born at all.” (160-61).

Needless to say, Hafer’s absurd analogy merely shows either that she doesn’t understand the ways that folks like Dembski and Meyer justify design inferences … or she is intentionally misrepresenting them. This is especially ironic when Hafer writes things like this: “Unfortunately it appears that ID promoters have deliberately overlooked all the information that is available on this subject [the blood clotting cascade]. Either that, or else they don’t know how to read.” (96)

Hafer also repeatedly commits the genetic fallacy. For example, she identifies the origin of the term “intelligent design” with an attempt to rebrand the creationism referenced in the textbook Of Pandas and People to make it fit for public consumption. This is an interesting historic detail, but even if the term and related movement did originate in such ignominious circumstances, that bears no direct relationship to the assessment of the quality of arguments currently offered for ID.

Finally, Hafer regularly invokes ad hominem arguments and base insults against ID theorists. For example, she opines: “in the more than twenty years that ID has been in existence, none of its promoters has run a single experiment. The only thing they’ve run is their mouths.” (155)

At it’s core, ID is a simple idea, the idea that under particular conditions, scientific explanations can legitimately appeal to intelligence. It is an idea that is perfectly consistent with Hafer’s ten exhibits of putative bad design. It’s an idea that deserves to be taken seriously, and that’s why it’s doubly unfortunate that the conversation has deteriorated to this point.

One thing is clear from this book: parties on both sides of the conversation bear responsibility for the current abysmal level of the discussion.