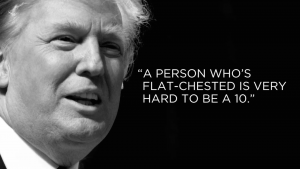 Over the last several weeks we’ve all encountered the hashtag #NotMyPresident along with the accompanying sentiment. The response has been predictable: Trump was elected by the electoral college, so he is president. And if you’re American, he’s your president, period.

Yesterday conservative Christian radio host Michael Brown issued his own indictment of the #NotMyPresident crowd. In Brown’s view, folks need to “Get over it” because Trump is their president:

To the Trump haters. I had massive issues with Obama as POTUS but he was still my president. Now Trump is yours. Get over it.

So how can a person decide whether they can, in good conscience, recognize the POTUS as their president? The starting point is an honest evaluation of the individual’s character and conduct. In my interaction with Brown, I decided to address one question: the outstanding charges of sexual assault:

@DrMichaelLBrown Let's consider one of many issues: there are 12 outstanding charges of sexual assault against Trump. "Get over it"? Really?

Unfortunately, I’ve seen many Trump supporters point out that Trump has not been found guilty of sexual assault in a court of law. But that is irrelevant. One does not need to await a criminal or civil judgment in a court of law to form an opinion on the credibility of charges.

Imagine, for the moment, that your son’s little league coach is accused of sexually assaulting twelve young boys from the league. Imagine, as well, that the man has a history of making suggestive and inappropriate comments about young boys. Imagine that the man could continue to coach until he was found guilty in a court of law. Would you keep your son on the team for the duration of the trial? The very notion is absurd. The fact is that we don’t need to await a court judgment to form our opinions about the man’s guilt.

By the same token, one does not need to remain agnostic on charges that Trump sexually assaulted women until there is a judgment in a civil or criminal proceeding.

So what does the evidence suggest? A history of misogynistic comments judging women by their physical appearance; sexualizing his own daughter as a “piece of ass”; sexualizing his other daughter when she was an infant by admiring her legs and speculating on her future cleavage; multiple witnesses stating that Trump would enter the change rooms at beauty pageants (including those with minors) in the hope of seeing female contestants in various stages of undress; his own bragging that he grabs women by their genitals; and the testimony of twelve witnesses, many with corroborating testimony from friends and family.

On the other side of the ledger you have Trump’s insistence that he didn’t do it. You also have his promise that after the election he would sue his twelve accusers, a promise that he has now broken. However, last week one of his accusers filed a lawsuit against him for defamation.