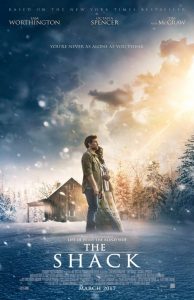 Some of my long time readers will know that my most successful book (by a country mile) was a companion to the phenomenally popular 2007 novel The Shack. William Paul Young’s novel told the unlikely story about a grieving father spending a weekend with the Trinity at the cabin where his beloved daughter was murdered. The book was rejected by more than twenty publishers before Young self-published. The book went on to sell more than twenty million copies.

In 2009 I published Finding God in The Shack, a theological guide to Young’s novel. While I didn’t sell twenty million copies, I did find surprising success with that book and I tell the story here. One update to that story: InterVarsity Press now owns the rights to Finding God in the Shack. And since they already have their own book titled Finding God in the Shack written by Roger Olson, it is no surprise that my book hasn’t been promoted over the last few years.

I’ve met Paul a couple times over the years and the first time he told me about his grand plans to make a Hollywood movie of the story. He was insistent that it wouldn’t be your standard “Christian” movie (i.e. the kind that would be filled with B actors, produced by Pure Flix, and marketed to a conservative Christian ghetto). Instead, he stated, if the movie would be made at all it would be done properly with a decent budget and good actors.

I admired Paul’s artistic convictions. He didn’t want his creative vision sold out to make a quick buck. But at the same time I was skeptical that such a film would ever be made.

Well, this is one case where I’m happy to be wrong. The Shack hits the silver screen on March 3, 2017. As for the big Hollywood actors, the protagonist, grieving father Mack, will be played by Sam Worthington of Avatar fame. And “Papa” (i.e. God the Father) will be brought to life by Octavia Spencer. This could definitely be interesting.

You can learn more about the film by visiting the website or the page on imdb.