During the election season, some Christian leaders prayed fervently for Donald Trump’s success, including this motley crew of Baptist and charismatic Word-of-Faith preachers (check out Trump’s crazy expressions during this very awkward laying on of too many hands):

However, I confess that I did not pray for Trump’s success.

But he won the election and now he is president elect. And so I need to consider a question: for those of us who did not pray for Trump before, do we need to start doing so now? And if so, how should we pray for him?

The New Testament on Praying for Leaders

In 1 Timothy 2:1-2 we read the following directive of prayers for political leadership:

“I urge, then, first of all, that petitions, prayers, intercession and thanksgiving be made for all people— for kings and all those in authority, that we may live peaceful and quiet lives in all godliness and holiness.”

And in Romans 13 Paul provides a providential principle to under-gird the idea of praying for leaders: God has established leaders in their places of power: “Consequently, whoever rebels against the authority is rebelling against what God has instituted, and those who do so will bring judgment on themselves.” (v. 2)

The Book of Common Prayer on Praying for Presidents

In keeping with this mandate, the Episcopal Book of Common Prayer includes in its “Prayers for National Life,” a prayer “For the President of the United States and all in Civil Authority”:

O Lord our Governor, whose glory is in all the world: We commend this nation to thy merciful care, that, being guided by thy Providence, we may dwell secure in thy peace. Grant to the President of the United States, the Governor of this State (or Commonwealth), and to all in authority, wisdom and strength to know and to do thy will. Fill them with the love of truth and righteousness, and make them ever mindful of their calling to serve this people in thy fear; through Jesus Christ our Lord, who liveth and reigneth with thee and the Holy Spirit, one God, world without end. Amen. (The Book of Common Prayer According to the Episcopal Church (1979), 820)

So it would seem that Christians who find themselves under the governance of Trump are called to pray for him. They are called to pray that he would be informed with wisdom and strength to know and do God’s will, to be filled with truth and righteousness.

Three Reasons to Pray for Trump

I recognize it may be hard for Never-Trumpers to get their heart into these prayers. So I’d like to share three reasons that Christians should pray for Trump’s success.

First, as I noted above, we are commanded to do so. And when commands are made with appropriate authority, they bring with them obligations. If Billy’s dad tells him to rake the leaves, then Billy is now obliged to rake the leaves. It has become his duty. And if we are commanded to pray for our leaders by God (through Scripture) then we are obliged to pray for our leaders. It has become our duty. Like it or not, that should be enough of a reason for any Christian.

But even if the command itself is a reason, it is not the only reason.

Second, we are to pray for the success of our leaders for the sake of the good of the nations they govern who will benefit from their success. Imagine that your spouse applies for a teaching job. But the job instead goes to your spouse’s arch rival, the curmudgeonly Mrs. Smith. You might then hope that Mrs. Smith would fail as a teacher. But if she does, the real losers will be the 25 young children who would fail to learn. If you really cared about the children you would hope that Mrs. Smith would succeed simply for the benefit of the children she teaches. And since you should wish the children learn, you should hope that Mrs. Smith succeeds in her teaching. By the same token, we should hope our political leaders succeed, even if we don’t like them, if only for the benefit of the nations they lead.

Finally, when you hold contempt for an individual, as so many have for Donald Trump, the commitment to praying for him and his success can be personally transformative. To that end, consider this now famous letter that George H.W. Bush wrote to Bill Clinton upon the transition of power in 1993: 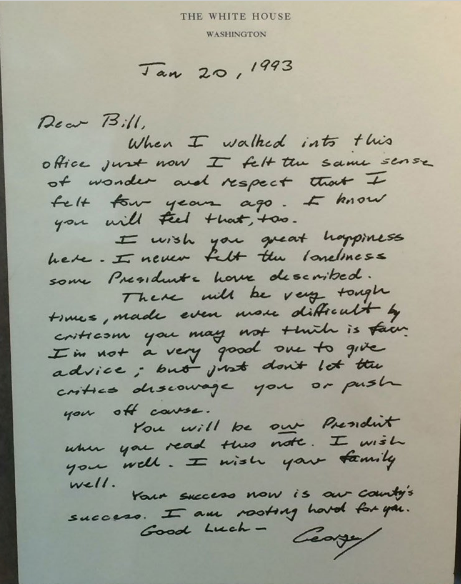 When I first saw this letter being widely reported in June, I was admittedly skeptical. A subsequent visit to Snopes confirmed that it was indeed genuine. And that makes it quite amazing. It cannot have been easy for Bush to affirm Clinton as “our President” and to wish him and his family well in life and governance. But he did it anyway.

If I commit to praying for Trump’s success, I commit to undertaking a course of action which will hopefully transform me into being the kind of magnanimous, grace-filled person who wrote this latter. I want to be the kind of person who would write a letter like the one written by George Bush. So for that end of personal transformation, I have all the more reason to pray for Trump’s success.

Having said all that, a person might still think that in some sense Trump represents a special case.

Over the last year Trump has engaged such deplorable conduct that he belongs in a basket all by himself. Perhaps no moment in his debased campaign angers me more than the moment he mocked a handicapped reporter. This kind of dehumanizing, exaggerated mimicry would be shockingly callous and puerile in a junior high boys locker room: coming from a 69 year old man in front of thousands, it is simply unimaginable:

That is but one example of Trump’s repeated demonstration that he lacks basic human decency. The same point could be made with respect to the man’s comments about women, refugees, POWs, Gold Star families, immigrants, et cetera.

So here’s the problem: how can you pray for the success of a person who has consistently exhibited such gross indecency to others? If I pray that Trump succeeds as a president, am I not thereby endorsing a tacit minimization of his various offenses?

The short answer is, no. And with that I return to one specific portion of the presidential blessing from the Book of Common Prayer: “Fill them with the love of truth and righteousness, and make them ever mindful of their calling to serve this people in thy fear.” Praying that another would be filled with the love of truth and righteousness is a bold request for the best of us, to say nothing of praying this blessing on a man like Trump. So what would it mean to pray it for Trump?

Think about praying that a man who has a debilitating drug addiction would be cleansed of his addictions. That’s a serious prayer because you can’t get to the point of being drug-free without first passing through a long and difficult road. Likewise, a man like Trump cannot be filled with the love of truth and righteousness without passing through a long and difficult road. It is a journey that would ultimately be restorative and redemptive, both for Trump himself and the nation he will lead. But it would be so very difficult.

One more thing: what if there are parts of Trump’s agenda that are bad for society? How can you pray for success in those areas? Simple: you can’t so you don’t. Any prayer for success is automatically qualified. Praying for a politician’s success doesn’t mean success in implementing their vision, full stop. Instead, it means success in realizing their vision to the extent where it conforms to the Good Society. So I pray that Trump succeeds to the extent that his vision conforms to that of the Good Society.

Put in those terms, I am most keen to pray for President Donald Trump’s success.