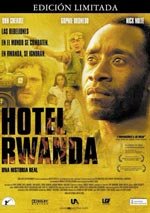 There is an important distinction between sins of commission (the evil action) and sins of omission (the evil failure to act). Note how reference to both is included in this familiar liturgical confession:

One of the great dangers for the healthy spiritual life is sourced in a failure to grapple with our sins of omission, our failure to act in the face of unfolding injustice and evil.

Consider, for example, the evil of genocide. If we were active participants in genocide, if we had the blood of genocidal acts on our hands, there would be no mistaking it. Consequently, our need to seek contrite repentance in search of absolution would be obvious.

But what about the sins of omission? When evils like genocide unfold around the world, do we do all we can to stop them? If we don’t, we may be awash in the guilt of sins of omission without ever realizing it.

The 2004 film Hotel Rwanda tells the story of how the Hôtel des Mille Collines in Kigali became a respite for journalists, peacekeepers, and desperate Tutsis fleeing the slaughter of those dark months in 1994. Eventually through the efforts of hotel manager Paul Rusesabagina, the hotel provided a refuge which saved over 1200 people.

But while the story provides some undeniable moral inspiration (Hotel Rwanda has been called “Africa’s Schindler’s List”), that inspiration is qualified by a heady dose of human realism. At one point, a journalist goes out of the hotel and manages to collect some horrifying footage of Tutsis being slaughtered in the streets. When Jack returns, Rusesabagina is relieved and hopeful that once the international community sees this footage, they will finally intervene to stop the slaughter.

Jack is less hopeful: “Yeah, and if no one intervenes, is it still a good thing to show?” Rusesabagina is perplexed at Jack’s cynical response: “How can they not intervene when they witness such atrocities?” While Rusesabagina’s reaction is understandable, the fact is that it is also naïve. Jack’s apparent cynicism is the result of years of seeing footage of unfolding atrocities largely ignored by the television audience. As he puts it, “I think if people see this footage they’ll say, ‘Oh my God, that’s horrible,’ and then go on eating their dinners.”

Do we have sins of omission that are in need of confession? Moments when we could have acted to defend the vulnerable and stand against injustice? As Jack puts it, how many times have we witnessed unfolding evils on our screens and then gone back to eating our dinners?