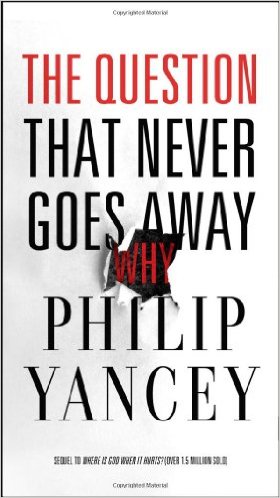 Philip Yancey. The Question that Never Goes Away (Zondervan, 2014).

Philip Yancey launched his illustrious publishing career close to forty years ago with the publication of Where is God When it Hurts? In his aptly titled 2014 book The Question that Never Goes Away Yancey returns to the enduring question of evil and suffering: why?

Three events in 2012 set the stage for this new book. To begin with, in March, Yancey was invited to speak in the Tohoku region of Japan on the one year anniversary of the devastating tsunami that claimed close to 20,000 lives. Then in October Yancey spoke in Sarajevo, a city in the former Yugoslavia that faced a four year siege in the early 1990s and was rent by ethnic hostilities and countless wartime atrocities. Finally, in December Yancey was invited to speak in Newtown, Pennsylvania just two weeks after the devastating Sandy Hook shooting. (By the way, the new Sandy Hook elementary school is opening, four years after the shooting.)

A raw depiction of evil

Yancey has always been an excellent writer and one who is not afraid of confronting the most difficult questions with disarming honesty and directness. Many Christian apologists understandably prefer to speak of evil in abstractions: i.e. “the problem of evil”. But Yancey does not flinch in describing the shocking horror of entire communities washed into the sea or a classroom of young children and teachers cut down by the gunfire of a deranged lunatic. And then there is this haunting summary of the evils that unfolded in the Balkans around Sarajevo: “Eyewitness reports from the court in The Hague read like a litany of horrors: pregnant women cut open, their unborn babies smashed with rifle butts; gang rapes of girls as young as nine; toddlers decapitated, their heads placed in their mothers’ laps.” (71)

One of the most agonizing moments in the book comes as Yancey recounts the moment the governor of Pennsylvania told panic-stricken parents their beloved children had died: “The governor’s senior advisor recalls, ‘It was a horrific scene. Some people collapsed on the floor. Some people screamed.’ Those outside the firehouse heard the wails and moans coming from inside. One witness likened it to a scene from the Middle East after a bombing when relatives beat their breasts and grief erupts.” (119-20)

A book that purports to wrestle with the question of why suffering and evil will presumably be shouldering the burdens of theodicy. But Yancey appears to be conflicted about this task, not least because he seems to consider theodicy (an intellectual exercise) as essentially linked to pastoral comfort (an emotional exercise). And theodicies are generally poor at providing comfort:

“After spending time in Japan and Newtown, I have adopted a two-part test I keep in mind before offering counsel to a suffering person. First, I ask myself how these words would sound to a mother who kissed her daughter goodbye as she put her on the school bus and then later that day was called to identify her bloody body. Would my words bring comfort or compound the pain? Then I ask myself what Jesus would say to that mother. Few theological explanations pass those tests.” (63)

It should not be a surprise to anybody that a mother facing the all-consuming agony of losing a child will not be comforted by any “theological explanation.” But that is quite irrelevant to the truth and importance of theological explanations. There is a time and place to explore theological and philosophical attempts to reconcile the divine nature with evil states of affairs. And measuring those efforts by their adequacy at providing comfort reflects a confusion of categories. They should be judged, rather, by their internal coherence and the evidence for them.

Not surprisingly, Yancey does offer a theodicy of sorts in these pages. And while there are genuine pieces of wisdom and insight complemented by Yancey’s eloquent prose, it seems to me that his apparent decision to judge theodicies by the standards of pastoral theology rather than biblical, systematic, and philosophical theology lead him to make some questionable assertions.

For example, while Yancey concedes that God can redeem suffering, he appears very uncomfortable conceding that there is any providential intent behind the initial occurrence of evil. For example, he writes: “I resist those who assume that God sends the suffering to accomplish the good. No, in the Gospels I have yet to find Jesus saying to the afflicted, ‘The reason you suffer from hemorrhage (or paralysis or leprosy) is that God is working to build your character.” (96) Elsewhere he writes, “Never do I see Jesus lecturing people on the need to accept blindness or lameness as an expression God’s secret will; rather, he healed them.”(61) But again, it is simply fallacious to judge the quality of a theodicy by whether we (or Jesus) would share it with a person in the midst of suffering.

The problem is also evident in Yancey’s apparent discomfort with assertions of divine providence in the natural world. The 2011 tsunami in Japan provides Yancey with an excellent opportunity to explore natural evil. Not surprisingly, he joins the chorus of Christians who denounce any attempt to link natural disasters to the punitive divine will. He recalls how some Christians suggested the 2004 tsunami in the Indian Ocean was divine judgment: “Some televangelists credited it instead to God’s wrath against ‘pagan’ nations in that region that had been persecuting Christians. Along the same line one Christian leader traced the cause of the 2011 Japanese tsunami to the fact that ‘Japan is under control of the sun goddess.'”(59)

But what is particularly revealing is how Yancey denounces any linking of the punitive divine will to natural disasters. He states: “Theories ascribing disasters to God’s judgment end up sounding more like karma than providence.” (60) To be frank, that’s a very strange comment given that the Bible repeatedly attributes natural disasters to a punitive divine will. According to the biblical authors, God punitive causes plagues (Exodus 7:25-8:32), disease (Exodus 9:1-7), floods (Genesis 6-9), volcanic eruptions (Genesis 19:24), storms (Exodus 9:13-35), hail (Joshua 10:11), earthquakes (Isaiah 29:6), and drought (2 Chronicles 7:13-14). Whether you choose to call this “karma” or not, it is thoroughly biblical, and Yancey does his readers a disservice by ignoring this material.

Just as God is described as indiscriminately punishing entire populations through natural disasters, so the Bible also repeatedly describes him as punishing people through military assaults, arguably including the AD 70 Fall of Jerusalem (e.g. Matthew 24:45-51). But here too Yancey attempts to distance divine (punitive) providence from this event, choosing instead to say, “Once again God did not overrule, letting history take its course.” (88)

While there are problems in Yancey’s theology, as I said the book also brings genuine pieces of insight and wisdom. To note one, while Yancey is clearly uncomfortable affirming explicitly that God providentially permits evil and suffering for the moral formation of his creatures, he does tacitly endorse this theme at several points. For example, in 2007 when Yancey almost died in a car accident he found himself contemplating three questions: “Who do I love? What have I done with my life? Am I ready for whatever is next?” (50) And he recalls a friend fighting stage 4 cancer who embarked on a chemo treatment with this prayer: “she asked God to similarly use her ‘toxic, painful trial to destroy, starve and kill anything in my soul that is selfish, unholy, offensive to him.” (104)

Another theme in the book’s final pages is ecclesiological. In short, while the question where is God? is important and must be asked, it should be complemented by an additional question: Where is the Church? And thus, if people want to find God in this world of suffering, they can often look to the Christian workers in Japan, the Franciscan monks in Sarajevo, and Walnut Hill Church in Newtown (149).

Perhaps the most important theme in the book is hope. Yancey notes that far from shaking one’s faith, suffering often renews and deepens faith. He presents the example of Archbishop Desmond Tutu whose faith was forged through two years as head of the Truth and Reconciliation Commission in South Africa (121-22). Through this experience Tutu did not discover the answers for why, but his faith and hope were deepened nonetheless.

Ultimately this hope is centered in the crucified and risen Son: “Because of Jesus, whom the New Testament describes as ‘the image of the invisible God,’ I can say with confidence that God is on the side of the sufferer.” (148)

In conclusion, from the perspective of theological and philosophical argument, The Question that Never Goes Away is a mixed bag as it muddles categories and makes some dubious assertions. But as with all Yancey’s books, it is eminently readable, it does convey some important theological points through vivid prose, and above all, it gives hope for those who suffer. Given that this is undoubtedly the book’s primary goal, one might call it a success.

If you enjoyed this review, please consider upvoting it at Amazon.com.