It is worthwhile to step back for a moment and take stock of what has unfolded just in the last week.

On Thursday, June 30th a woman stood up at a Trump rally and asked Trump to remove all the “heebie-jobies” (an apparent reference to Muslim women who wear hijabs) from the TSA and replace them with “veterans”. (Presumably she meant to exclude all veterans who wear the aforementioned “heebie-jobies.”) 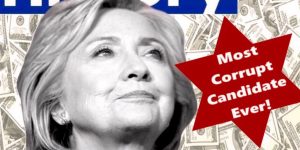 Then on Saturday, July 2, Trump retweeted the infamous meme depicting Hillary Clinton’s face set against the backdrop of $100 bills and a Star of David. The image originally appeared a couple weeks earlier on an anti-Semitic, racist feed. Trump, the habitual liar, claimed the image was just a simple star, or maybe a sheriff’s badge (despite lacking the rounded end points of a sheriff’s badge). But anybody moderately literate in anti-Semitic propaganda would get the message: Hillary is corrupted by “Jew money”.

“The first IHT trial, which was televised gavel-to-gavel in Iraq, dealt with allegations that Saddam Hussein and his co-defendants responded to a 1982 assassination attempt in the town of Dujail by attacking the inhabitants with helicopter gunships; destroying the town‘s farmland, date palm groves, and water supply; arresting 300 residents and interrogating them at torture centers where one-third died; interning whole families at a remote desert compound for four years; and referring the survivors to the Revolutionary Court where they were found guilty without a real trial, sentenced to death, and executed.”

Think about it. These three examples have all occurred in the last week. By this time comparisons between Trump and Hitler have become overly familiar, and you might be tempted to chalk it up to Godwin’s Law. But the evidence is overwhelming. Trump is not just a bloviating carnival barker, entertainer, and over-rated business mogul with an orange pall and bad hair. He’s a dangerous dictator in the making. Watching his rise in the completely corrupted GOP is chilling. Seeing the way his demagoguery appeals to millions of disenfranchised voters is terrifying. And having witnessed pathetic conservative Christian leaders line up behind him is enough to make one vomit.