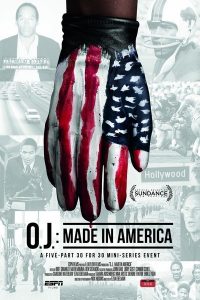 It was June, 1994 and I was taking summer courses at the University of Regina when I walked into the dorm lounge and saw everybody crowding around a television set watching aerial footage of a white Ford Bronco driving on the highway. “What’s going on?” I asked. One of the guys briefly turned and replied: “It’s O.J.!”

I had never been a big football fan, and so my knowledge of O.J. Simpson was sketchy at best. But over the next couple years, I would join millions in watching with morbid fascination as his life was laid bare in what would be widely billed as the “Trial of the Century.”

Later I remember my disbelief and anger when, on October 3, 1995, O.J. was acquitted of the murders of Nicole Brown Simpson and Ronald Goldman. I was completely incredulous as to how such a gross miscarriage of justice could occur. Even more incredibly, as I would later discover, the jury took a mere three hours to reach a decision after a 9 month trial.

The new long-form documentary O.J.: Made in America explains the logic of those ill-fated jury deliberations. As one of the jurors candidly put it, the acquittal of O.J. was “payback” for the beating of Rodney King. And while other jurors would surely not agree, it’s a jaw-dropping moment of candor which points us to the ultimate focus of this documentary.

In short, the real guilty party being placed on trial here is not simply O.J., but America itself.

Director Ezra Edelman builds his case with an initial contrast between the supposedly progressive 1960s Los Angeles and the bald and systemic racism of the Deep South. But that progressive patina was shattered with the Watts Riots of 1965. Edelman goes on to include several more instances of systemic racism and police corruption culminating in the 1992 riots that followed the acquittal of the officers who beat King. The inescapable lesson: racism remains a terrible problem on the progressive Left Coast. And it is only when we understand the depth of rage and alienation of those who endured this racism for years that we can begin to grasp the logic of that “payback”.

As for O.J. himself, he strikes me as a shell of a human being, that which aptly fits the profile of a clinical psychopath. Like Donald Trump, he is utterly obsessed with personal fame, adulation, and the satisfaction of his primal desires. He has no impulse control and he cavalierly manipulates people to his own ends while exuding a superficial charm.

But again, O.J. is merely a symptom of the problem. Whether it is the systemic racism underlying the trial or the nauseating tabloid news cycle that followed it, O.J. is a mirror on the culture that made him what he is. If he is Frankenstein’s monster, we have created him, and so we must share the guilt.