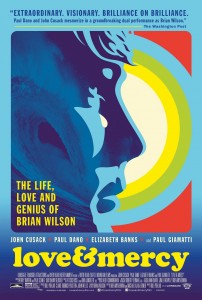 If there is a timeless soundtrack for an endless summer of carefree youth, joy, and innocence, it is found in the music of The Beach Boys. I should know: I’ve been a fan for more than thirty years. Growing up in the eighties I whiled away the summer listening to the intoxicating melodies of “Good Vibrations” and “Surfin’ USA”. At the Bible camp talent show in grade 9 I even performed a Christianized version of “Surfin’ Safari” with my friend J.P.:

“Everybody’s sinnin’ now, got some souls for winning now

And all the while, I never grasped the tortured genius that lay behind the music.

A hint came in 1992 with a hit song by the Canadian band The Barenaked Ladies (none of whom are naked … or ladies). The memorable chorus of “Brian Wilson” goes like this:

“I’m lying in bed just like Brian Wilson did”

What? Brian Wilson was lying in bed? Why? For how long?

To discover that the joyful and carefree sounds of youth were borne of a very dark place was something of a revelation. Alas, it was Brian Wilson who introduced me to the phenomenon of the tortured genius.

So when Smile, Brian Wilson’s fabled follow-up to the masterpiece Pet Sounds was finally released in 2004 — after close to a thirty year gestation period — I snapped it up. But questions remained. I knew Brian had been sick. I knew he was now better. But how did Brian end up lying in bed in the first place? And how did he ever manage to recover sufficiently to record the masterful Smile?

We find the answers in Love and Mercy, the brilliant bio-pic released in June 2015. The film takes the unusual step of casting two different actors to portray mid-1960s Brian (Paul Dano) and mid-1980s Brian (John Cusack). While I was initially skeptical, I’m delighted to say that the casting was itself a work of genius as illustrated in the way each actor manages to channel Brian’s pathos, genius, and faltering steps toward redemption. (And with squinting eyes and a little imagination Cusack pulls off Dano + twenty years.)

As a bonus, Dano and Cusack are complemented by outstanding supporting work from Elizabeth Banks and the ever-watchable Paul Giamatti as the nefarious Dr. Eugene Landy. (Bwa-ha-ha-ha!)

Wouldn’t it be nice?