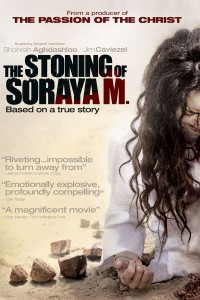 “How can you do this to anybody?”

The question comes from Soraya M. to her Iranian village as she is about to be stoned for false charges of adultery. (Soraya’s husband fomented the charges based on his desire to be rid of her so he might marry a fourteen year old girl.)

Soraya is buried up to her waist. Her hands are tied behind her back. The execution can now proceed.

The villagers line up to stone her. Her father is first. “God help me,” he calls out. “Kill this whore!”

His stones miss their target. Frustrated, Soraya’s husband grabs a rock and hits her twice in the forehead. Her head snaps back and blood spills from the wound, soaking her white dress, and spattering onto the dusty ground.

Her sons are next.

Then the men of the village come up, one after another, pelting her. Cheering. She’s semi-conscious now, swaying.

All hell breaks loose as a flurry of sharp stones erupts from the mob. Blood sprays. A woman turns her head and vomits.

I watched this film for two reasons. First, I believe it is important that we confront the barbarism and inhumanity in our world today. And as the film makes brutally clear, barbaric practices like public stonings continue to occur in the world today.

Second, I watched the film in support of my ongoing reflections on the problem of biblical violence, and in this case the brutality of particular Torah punishments like stoning. It’s one thing to read about a legislative mandate supporting public stoning; it’s another thing entirely to view a public stoning, albeit one that is a cinematic recreation.

And that brings me back to Soraya’s question with which I began this review: “How can you do this to anybody?”