Bernie Sanders’ campaign has generated a lot of excitement. Who could have foreseen last May that the awkward campaign launch of this stern septuagenarian with the dandruff and wild hair would erupt into one of the biggest political stories of the last year?

While Sanders has attracted many followers with his promise of universal health care, free university education, and a dovish foreign policy, arguably the most interest and enthusiasm has centered on his critique of Wall Street corruption, and in particular the extent to which corporate money is influencing democratic elections. (By now everybody knows that (1) Sanders doesn’t have a super pac and (2) the average donation to his campaign is “27 bucks”.)

I’m sympathetic with Sanders on all these issues, even if his lofty promises strike me as more than a bit unrealistic (dare I say naïve?) in a country as deeply polarized as the United States. But what most disappoints me about Sanders is that his revolution stops at calling out corporate money in the political process. In other words, he fails to raise a flag over the extent to which public opinions are manipulated by advertising agencies. And whether those agencies are crafting their campaigns on the funds of massive corporate sums or twenty seven dollar increments of public donation, the result is the same: people are being manipulated by way of masters of manipulation whose singular goal is to persuade rather than to inform.

One might be inclined to identify examples like the presence of misleading suggestions in Sanders’ advertising (see, for example, “Sanders Campaign Ad Misleadingly Suggests Endorsements”). But that is at best a marginal issue.

To get down to deeper issues, consider the issue of branding. Today brands are not merely means to identify products, they are lifestyle complements and means of social identity. From Starbucks coffee to BMW cars to Hollister clothing, people increasingly identify themselves with particular brands. The most impactful brands with the deepest sense of personal loyalty are often referred to as lovemarks.

The key of powerful branding is that consumption of the brand eventually becomes disconnected from the product. Coca Cola discovered this in 1985 when they changed the formula of Coke based on extensive blind taste tests. Consumers preferred New Coke by a wide margin in blind taste tests. But when the switch was made, people took to the streets in outrage, demanding that their beloved Coca Cola be returned to its original (inferior) flavor. Bewildered, the Coca Cola Company realized that they had cultivated a lovemark, one whose enduring success was curiously detached from the quality of the product itself. 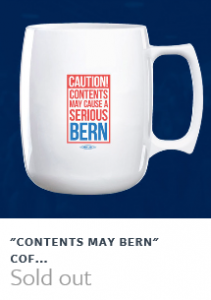 It’s one thing if a sugary soft drink can be successfully marketed as a lovemark in which fidelity to the identity of the brand overwhelms the intrinsic merits of the product. It’s another thing altogether when something similar happens to a social movement or political campaign. The stakes are significantly higher when we’re in the sphere of social organization, law, and governance.

Today advertisers draw upon very powerful tools from social scientific fields like persuasion psychology and communication theory. And this gives them a greater ability to manipulate public opinion than ever before.

Let me put it like this. When Clinton angrily challenged Sanders’ suggestion that her large corporate donors might influence her decisions, Sanders rightly replied by posing the rhetorical question: if the money has no influence in politics then why are donors making the massive donations in the first place?

I have no doubt that Bernie Sanders would prefer to receive votes based on the force of his policy proposals. But no doubt he will nonetheless be more than happy to get a vote simply because people want to “Feel the Bern” just like their best friends. Sadly, this increasingly sophisticated appeal to non-rational factors to persuade voters is eroding the square of public discourse that is the core of democracy.

My eyes were opened to this problem a decade ago by the excellent 2005 documentary “Our Brand is Crisis” (not to be confused with the middling 2015 comedy of the same name). The film provides a stunningly candid portrayal of a team of American political pundits adept at manipulating public opinion who become hired guns to ensure the desired outcome of a Bolivian election. The chosen brand in Bolivia is “crisis”, i.e. vote for our guy or crisis will grip the nation. No policy proposals needed: just the visceral appeal to crisis. If you’re interested, I’ve included a link to the full movie below. It is well worth watching.

One might best summarize the philosophy with a quip from Clint Eastwood’s film “Flags of Our Fathers”. The film depicts the background of the famous Iwo Jima flag raising photo and its use for propaganda during the war effort. At one point in the film one of the men on the propaganda tour observes: “We need easy to understand truths and damn few words.”