The book Watership Down begins with an intrepid group of rabbits escaping a doomed warren in search of a new life. And so they begin a journey across the dangerous open English countryside.

Soon they arrive at a warren that seems to offer peace, security, and a comfortable respite from the unknown. There are no predators and the farmer nearby feeds them by regularly leaving vegetables just outside the warren. The ambassador for the warren, Cowslip, invites them to stay. Initially, it seems like they’ve found the perfect place.

But they are not there for long before they realize that the apparent safety and regular food supply of the warren come at a terrible price. It turns out that the farmer is not benevolent after all, and in exchange for the safe environment and food supply, he regularly captures a rabbit for the evening’s stew. It doesn’t take the group long to decide that the freedom and security offered by Cowslip’s warren are not worth the cost, and they leave it behind to journey out into the unknown. 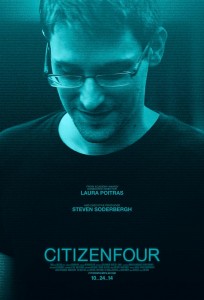 I thought of that scene as I watched Citizenfour, winner for the 2015 Academy Award for best documentary. The film tells the story of Edward Snowden. When he was an employee of the NSA Snowden systematically contributed to a global plan of observation of citizen populations which regularly trampelled the values of democracy and the right to privacy in favor of the calming benevolence of Big Brother.

Except that Big Brother is not always benevolent. And democracy is still a value worth protecting. Eventually Snowden could not reconcile the fact that his daily activities in service of a giant, anonymous government agency were regularly crossing moral and legal lines. And so, by way of the cloak and dagger of encrypted emails, he contacted documentary film maker Laura Poitras, preparing to become a whistleblower in the grandest fashion imaginable. (Indeed, “whistle” hardly does this justice. Snowden’s running the air raid siren.)

Eventually they meet in Hong Kong in June 2012 along with journalist Glen Greenwald. Over the next week Snowden begins to unpack the extent of government surveillance. And it isn’t just the United States. Many western governments are engaged in similar surveillance of resident and foreign populations. Indeed, Snowden observes that the British GCHQ program Tempora is the envy of other western governments. These and other revelations pour forth over the next several days and they form the nucleus of the documentary.

As the film unfolds we learn about the extent of government mass surveillance and the unrestricted collection of metadata on the general population. We learn how anonymous people half way around the world can track your movements in real time and how the subjective interpretation of metadata can quickly turn innocuous actions into a subversion of the state that places you on a watchlist … or worse. In this brave new world there could be no more subversively anodyne statement than “If you have nothing to hide, you have nothing to fear.”

I predict it is just a matter of time before Paul Greengrass directs a movie of Snowden’s life starring Matt Damon. The dramatic contours of Citizenfour certainly are ripe for Hollywood. And when Snowden’s life becomes a plot point for the latest blockbuster at the local cinema, the Hollywood treatment will be the final step in the domestication of revelations that should cause shock and outrage. Pass the popcorn.

After watched Citizenfour, the realization that shocking revelations have become mundane is what disturbs me most. Over the last couple years I’ve increasingly become accustomed to the fact that my emails, Google searches, and tweets are probably being observed by others and processed by massive computer terminals in anonymous desert locations. Having become accustomed to that fact, I’ve tacitly accepted the paradox that one’s freedom is the cost of freedom. In short, I live in Cowslip’s warren.