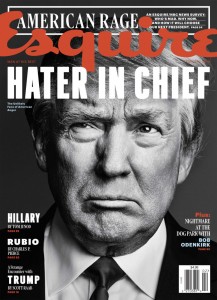 As part of their series “My Kid Would Never Do That” Dateline NBC set up situations in which children were presented with the potential threat of strangers. Most parents confidently predicted their children would detect so-called “Stranger Danger” by drawing upon years of parental wisdom. And time and again they were disappointed, if not shocked. The dismal results presumably called for some parental soul-searching.

Donald Trump has made the cover of Esquire Magazine for February with the provocative new title “Hater in chief”. The moniker is well deserved: back to the launch of his presidential campaign when he referenced Mexican rapists and drug dealers to his insulting commentary on the physical appearance of women from Rosie O’Donnell to Carly Fiorina to his broadside attack on all Muslims to his schoolboy mockery of everybody from the physically handicapped to Rand Paul and Jeb Bush, Trump is indeed aptly described as “hater in chief”. He’s a hateful, ignorant, nasty man.

Okay, that sets the stage for a new version of Dateline NBC. Christians are supposed to be followers of Jesus, and the Prince of Peace seems to be a rather poor fit with the Hater in Chief. So you might have expected (or at least hoped) that Christian evangelicals would steer clear of Donald Trump: “God’s Church Would Never Do That.”

Churches that produce congregants who are drawn to support a hater in chief?! I’d say those dismal results definitely call for some pastoral soul-searching.