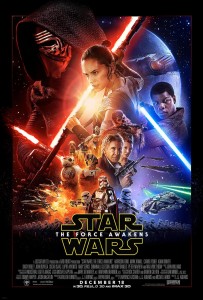 Please note: there are no spoilers in this article, except for the observation that J.J. Abrams spoiled a great opportunity.

I walked out of Star Wars: The Force Awakens thinking, “Was it just me?” After all, the film had stellar critical reviews, an outstanding 8.6 user rating on IMDB, and record-setting box office. Granted, there was that one Grinch reviewer from the Vatican who didn’t like it. But hey, asking some aging priests to rate the latest Hollywood blockbuster is like asking grandpa to rate the latest AC/DC album. (On second thought, a large portion of AC/DC’s fan base are grandpas. Anyway, you know what I mean.)

And yet, when I talked to one of my friends who’d seen the movie he shrugged his shoulders with a “meh”. Since then, I’ve found about one third of the people I’ve talked to have guardedly expressed disappointment with the latest installment. So it wasn’t just me. Others found the film perfunctory, unimaginative, and consisting of a slavish adhering to A New Hope‘s plotline. Not even a droid ball could save this one.

But still, my concerns were burbling on the backburner. After all, other people I asked would immediately overwhelm my tepid question with gushing “I loved it!” And that would be just enough to lead me to question my misgivings once again.

Then I read Michael Hiltzik’s column in the LA Times titled “Admit it: ‘Star Wars: The Force Awakens’ stinks — and here’s why“, and it blew my concerns wide open.

Hiltzik begins by observing that the film “reproduces George Lucas’ original 1977 movie slavishly almost to the point of plagiarism.” He then adds,

“This isn’t to say that it’s not an enjoyable way to spend a couple of hours. If you’re among the millions who plainly have done so, bless your heart. The issue, however, is whether “The Force Awakens” even deserves to be considered as a movie, because it’s not. It’s the anchoring element of a vast commercial program, painstakingly factory-made for maximal audience appeal, which means maximal inoffensiveness. The result tells us a lot about the state of entertainment today, and about the future of Hollywood.”

Why am I surprised? In the lead up to the film I kept hearing ad nauseam about how Disney paid $4 billion for the franchise and were determined to “recoup their investment”. Well, it is now clear that they will do that and more power to them. But the resulting product is about as lifeless as a loaf of Wonderbread.

There are good reasons why The Force Awakens has been received so well and they pertain to cognitive biases like the contrast effect (it certainly is far better than the immediately preceding three installments), expectation bias (people had understandably high hopes that Abrams would succeed) and the bandwagon effect (everybody loves it!).

Biases aside, for a large portion of the audience (myself included) there is a powerful nostalgia with seeing the Han Solo, Luke Skywalker, and Princess Leia once again. But after watching The Force Awakens I must admit that the real Star Wars films, the ones of my youth, are now a long time ago, and far, far away.