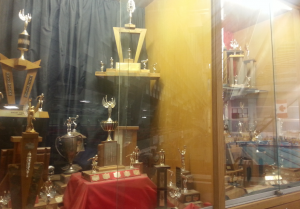 The dawning of a new year is a great opportunity for a little life reflection. But this New Year’s Eve, don’t stop with the standard resolutions (e.g. lose weight!; spend more time with family!; read more books!). Dig a little deeper by considering the question of meaning.

A little while ago I was reading an essay in which an atheist claimed that human lives are meaningful insofar as they have projects. Unfortunately, he never offered a moral framework to evaluate the kind of projects we pursue.

One more thing: projects may be personally fulfilling and good without being transcendently significant, without having that lasting good that I referred to above. But the question of meaning, so it seems to me, is one that is most satisfactorily answered with respect to accounts of meaning that offer not merely personal fulfillment but transcendent significance and lasting good.

A few weeks ago I was killing time at a sports complex waiting to pick up my daughter. I had found a little alcove to sit and work on my computer, nestled right beside a largely forgotten trophy case with aging trophies covered in a layer of dust. Ensconsed there in my alcove, I mused on the fact that these trophies represented triumphant sports performances of thirty, forty, and fifty years ago, few of which were of any significance to people today. In short the various projects that crowded the trophy case may have yielded temporary personal fulfillment. But now, largely forgotten and covered with a layer of dust, they offered no transcendent significance and little-to-no lasting good.

As you look to the new year, ask yourself if your view of the world yields an account of meaning that offers personal fulfillment, an objective value assessment, and transcendent significance that produces lasting good.

If it doesn’t, might I suggest that you keep looking?