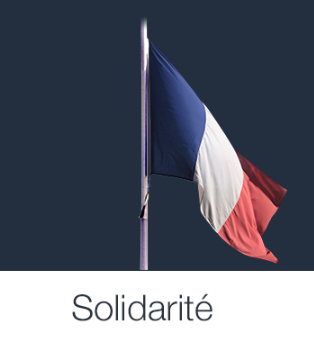 This article serves as an addendum to my article “Why atheists shouldn’t object to the call to ‘Pray for Paris’.” In this case I will offer a simple illustration to demonstrate just how absurd it is for atheists to take offense at (or offer criticisms of) calls to pray for Paris in the wake of this most recent moral atrocity.

Let’s begin again with the image I included in my previous post, a French flag which was displayed on Amazon.com to express solidarity with the French people. Wouldn’t it be absurd for somebody to complain about this image?

Enter the anarchist who advocates for the abolition of nation states and the rise of post-national stateless societies consisting of free associations. Imagine that this anarchist protests Amazon.com’s image and all other demonstrations of solidarity that draw upon flags and other nationalist or state-based symbols. The anarchist then proceeds to launch into a defense of his anti-government, pro-anarchist views.

How would you react to this anarchist? If you’re like me, you’d concede that the issues he raises are interesting and worth discussing. But you’d also insist that this is not the time or the place to dredge up the perennial debates between anarchists and non-anarchists. Indeed, his dogged persistence in pontificating in reaction to a simple image intended to express solidarity would appear churlish and insensitive.