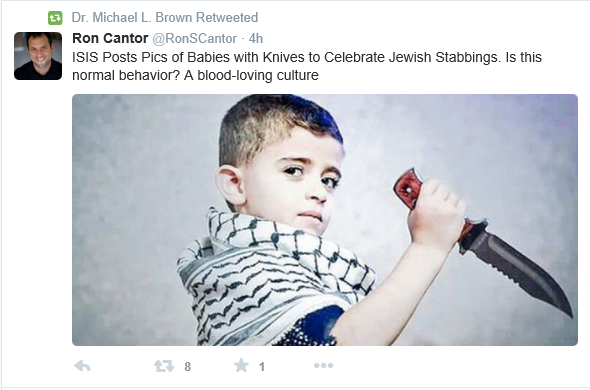 First, let me begin by noting that while ISIS apparently posted the pictures, I take it the focus of Cantor’s comments is not so much ISIS as the Palestinians since (1) the Palestinians are on the frontline of this abhorrent incitement of violence against Jews and (2) Palestinians constitute a cultural group while ISIS does not (and Cantor refers to the culture in his tweet). As a result, my response is concerned with the Palestinians, not with ISIS.

That said, we can turn to the tweet itself beginning with Ron Cantor’s rhetorical question. The answer: No, that isn’t normal behavior (obviously).

So now the next question: when large numbers of people in a society begin to act in such an abnormal manner, how do we explain that abnormal behavior?

Ron Cantor immediately provides his answer: the people group in question are “A blood-loving culture.” In other words, the people simply love and glorify violence.

I have three responses to that analysis.

First, while I concede that it is always possible that an entire cultural group is on the whole simply behaving in an inexplicably degenerate way with no prior contributing causes or catalysts, the better part of charity and wisdom is first to seek for potential causes and catalysts which could provide some kind of explanation for the abnormal behavior. And let me add what should be obvious (but is nonetheless regularly missed in conversations like this): a causal factor is not the same as a justification.

Second, anybody with a passing familiarity with the tortured context of Israel and the occupied territories over the last fifty years will be aware of ample causes and catalysts for this current morally indefensible incitement to random violence. If you want to spend a couple hours getting up to speed on some of that background, you would do well to watch the 2012 documentary “The Gatekeepers” which interviews six former heads of Shin Bet, Israel’s secret service agency.

Third, when group 1 is being attacked by group 2 who is acting in an “abnormal” way, about the worst service you can do to group 1 is to short-circuit the search for underlying causes and catalysts with facile explanations that demonize the abnormally behaving group 2 … like dismissing them as “a blood-loving culture.” The wise person will exhaust the search for causes and catalysts which might be addressed in breaking the spiral into abnormality before they simply dismiss the entire group as fundamentally irrational and/or immoral.

George Santayana famously observed, “Those who cannot remember the past are condemned to repeat it.” One might add, those who ignore the underlying causal factors of abnormal behavior are effectively encouraging that very behavior … as well as the future victimization of others by it.