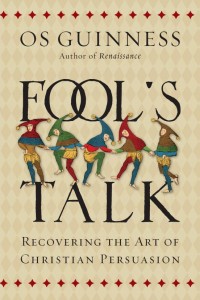 Os Guinness’s latest book, Fool’s Talk, is devoted to a very important topic: apologetic persuasion. And the time couldn’t be better for such a book: While contemporary Christian apologetic arguments have attained an impressive level of sophistication, all too often the apologists who use them are comparatively lacking in persuasive, rhetorical ability. Enter Guinness to introduce “the art of speaking to people who, for whatever reason, are indifferent or resistant to what we have to say.” (18)

The book is written in Guinness’s crackling prose which calls to mind the writing of two of his greatest influences, G.K. Chesterton and C.S. Lewis. It also includes many rich seams of argument such as an intriguing discussion of the power of laughter which culminates in this provocative observation: “The dynamics of the cross of Jesus are closer to those of comedy than tragedy.” (77)

In addition, Guinness also distributes many nuggets of wisdom throughout the text like this bit of good sense: “Very few people are strictly and consistently logical, so to catch their small inconsistencies is merely to annoy them and put them off.” (121)

Despite those undeniable virtues, my overall response to Fool’s Talk can be summarized in one word: disappointment. This disappointment is traceable to two shortcomings: (1) a lack of practical guidance in the methods of persuasion; (2) an unseemly, abrasive and dismissive tone toward one’s interlocutors. In the remainder of this review I’ll expand on these two points.

In search of the means of persuasion

Satisfaction is inextricably linked to expectation. Before reading Fool’s Talk I was anticipating a text that would provide significant practical guidance in how to become more persuasive in engaging with others. Unfortunately, save for the above-mentioned occasional nuggets of good sense, I was largely disappointed.

The problems begin in chapter two as Guinness launches into a bold critique of the use of technique which he derides as “the devil’s bait for the Christian persuader today….” (30) While I share Guinness’s concern over the abuse of technique, I find his attitude to be far too dismissive here. We may agree with Guinness that “there is no McTheory when it comes to persuasion” (32) while still pillaging the wisdom of the Egyptians in fields like persuasion psychology and communication theory. It would have been far more helpful if Guinness had provided more guidance in how to appropriate the insights of these fields judiciously so as to communicate apologetic arguments in a more winsome and effective manner.

In the moments that Guinness did broach concrete questions of method, his advice often struck me as vague and unhelpful. For example he warned, “The lost art of Christian persuasion certainly includes a method, but a method that is overwhelmed and utterly lost in the message that shapes it and the Master whom it serves.” (45) To be honest, I’m not even sure what this means, let alone how this can productively inform my real world interactions with others.

Similar problems were evident in the fourth chapter which takes up the central theme of Christian persuasion being informed by the way of the cross. Guinness envisions here the theme of Christ’s weakness (the “fool”) being vindicated in power and thereby revealed as the “jester”:

“The fool maker is the person who (once again) is not a fool at all, but who is prepared to be seen and treated as a fool, so that from the position of derided folly, he or she may be able to bounce back and play the jester, addressing truth to power….” (72)

There are some profound, architectonic themes being explored in this chapter. But once again, I found the end result still left the apologist with little concrete guidance in how to become more persuasive. One of Guinness’s favored examples of a masterful jester is found in Erasmus’ work In Praise of Folly. But few of us will ever approach Erasmus’ rhetorical brilliance, nor does Guinness provide much guidance as to how we might begin to close that gap.

A most unpersuasive tone

If the lack of practical guidance into the means of persuasion was disappointing, the book’s abrasive and alienating tone toward others was deeply ironic and counterproductive to the book’s stated purpose. The problem here, in short, is that Guinness tends to caricature the views of others and present them in the worst light. And to be frank, it is hard to think of a more effective way to undermine the goal of persuasion than engaging in this kind of behavior.

Strong words, I know, so I’m going to turn now to providing several examples of these rhetorical slights.

Consider, first, Guinness’ scathing dismissal of postmodernism, a movement which, so Guinness claims, is “inherently hypocritical” (193). As Guinness puts it, postmodernists say that “truth” to nothing more than a “compliment we pay to claims and ideas that we agree with….” (194) No doubt one can find postmodernists who have said things like this (e.g. Richard Rorty), but there is no justification for painting the whole incredibly diverse movement (if it even can be considered a “movement”) with the same brush. I can only assume that Guinness is simply ignorant of the work of scholars like James K.A. Smith (e.g. Who’s Afraid of Postmodernism? Taking Derrida, Lyotard, and Foucault to Church (Baker, 2006)). Apart from ignorance, there simply is no defense for such an uncharitable and unqualified dismissal.

Next, consider Guinness’s treatment of theological “liberals” and “Emergent Evangelicals”. Guinness sets up his discussion of theological liberals against the backdrop of Enlightenment skeptics who have foolishly abandoned revealed truth in favor of popular opinion: “So ‘one can no longer believe’ was the cry of the chronological snobs and the techno-idolaters as they discarded whatever was not the ‘latest and greatest, and the newer and truer.'” (218)

The problem with such rhetoric is that it utterly fails to grapple with the fact that everybody is a liberal (or progressive) relative to some other group. For example, most Christians today differ from their forbears of two or three centuries ago in how they read the Bible on topics like slavery, corporal punishment, the age of the earth, and the status of women. In short, compared to an earlier time, we’re all liberals. So how liberal must one get before one is derided as a “chronological snob and techno-idolater”?

Guinness extends his derision to “Emergent Evangelicals” who “have emerged and aged until now only nostalgia or denial allows them to still claim that they are emergent.” In fact, he adds, emergent evangelicals are simply “a recycled Protestant liberalism with the same feeble hold on the Bible and truth….” (224)

I find this kind of tone deeply offensive. The number of Christian leaders — theologians, pastors, etc. — who would identify as emergent is very broad and diverse. And there is absolutely no justification for dismissing all who share that affiliation as having a “feeble hold on the Bible and truth”.

Guinness’s attitude toward “liberals” and “Emergent Evangelicals” is well summarized in a passage he quotes from Thomas Oden. In the passage in question, Oden replied to the popular cry of the 1960s liberal “Don’t trust anyone over thirty” by countering “Don’t trust anyone under three hundred.” (224) That’s a nice bit of rhetoric, perhaps, but that’s all it is. To return to the examples I cited above, do you really want to limit your opinions on topics like slavery, corporal punishment, the age of the earth, and the status of women to 300 plus year old theologians? With this attitude Guinness adopts a Luddite chronological snobbery in reverse which is no better than that of his all-too-trendy opponents.

As Guinness puts it, there is apparently an inverse relationship between theological change and Christian unfaithfulness: “the further the revisionists go, and the more extreme they become, the more disloyal they are to Jesus and the more damaging they become to the Christian faith.” (225) I’m sure Christian reformers like William Wilberforce and Martin Luther King Jr. heard exactly that kind of conservative rhetoric as they made their bold entreaties for radical theological, social, and economic change. In short, Guinness’s language here is nothing more than bully rhetoric for defending the present form of conservative doctrine, whatever that may be.

Next, consider how Guinness approaches all those who doubt the nature, providence, and/or existence of God (a diverse group that includes everyone from the committed new atheists to the struggling Christian). Here is how Guinness sets it up:

“Faith desires to let God be God. Sin has framed God, whether by the ultimate insults that he, the creator of all things, does not exist, or that he, the white-hot holy One, is responsible for the evil and suffering that humans have introduced into his good creation. So God’s name must be cleared and his existence and character brought to the fore beyond question. Thus ‘Hallowed be thy name’ is our prayer and the defense of that name is our burning motive in apologetics.” (54-55)

Guinness concludes, “In short, so long as sin frames God, those who love God have a job to do in the world. We are defenders of the one we know and love.” (55) Note the absolute, stark, binary opposition of this passage. Either you accept God or you sin. It’s just that simple.

Except that it isn’t. I have known many people on that spectrum from the new atheist straight through to the doubting Christian who struggled with the existence and/or nature of God. One example that I’ve invoked on several occasions in my books is Bob Jyono. At one time he was a faithful Catholic. But that changed when he learned that the local priest had raped his daughter in his house over several years. Jyono’s faith never recovered. Is his loss of faith a manifestation of sin? What about Mother Teresa’s famous doubts peppered through her posthumously published journals? Was that sin too?

Finally, consider Guinness’s treatment of the “hostile atheist”: “to a hostile atheist, mention of God at the start of a conversation is like a red rag to a bull, and invites a snort and a pawing of the ground.” (33) While I agree that some atheists can be very angry and aggressive toward Christianity, this strikes me as a very demeaning and uncharitable metaphor and one that is likely to be anything but persuasive for the audience Guinness allegedly wants to reach.

At one point in the book, Guinness observes that hypocrisy is second only to the problem of evil as a purported basis for atheism (190). I wouldn’t call Guinness hypocritical, but I do believe his abrasive tone is deeply inconsistent with his stated goal of persuasion.

Inconsistent, and ironic, and so very disappointing.

Thanks to InterVarsity Press for a review copy of the book.