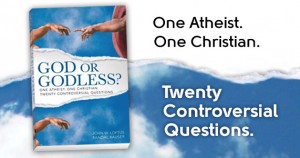 In this, the sixth installment of my readers’ guide to my book God or Godless, we turn to Loftus’ thesis where he argues that: “The biblical God required child sacrifices for his pleasure.” In his opening statement Loftus argues that

“despite some biblical exhortations that child sacrifice was alien to the worship of Yahweh, a closer inspection shows instead that this practice was within the mainstream theology of the Yahweh cult. Only at a later stage in the history of Israelite religion was child sacrifice branded as counter to the will of Yahweh.” (39)

“In the New Testament Christians even interpreted the death of Jesus as God sacrificing his only begotten Son to atone for our sins.” (39)

We need to keep in mind that just as my arguments are directed not only against atheism simpliciter but against Loftus’s particular brand of atheism cum scientism, so he is directing his arguments not merely at theism simpliciter but at my specific brand of theism. This is important to remember because obviously the thesis under dispute in this chapter has absolutely no relevance to theism per se. In other words, whether or not the conception of God one finds in the Bible includes vestiges of tradition in which that God was understood to demand human sacrifice provides not one shred of evidence against the existence of a metaphysically necessary, omnipotent, omniscient and omnibenevolent agent who created and sustains all things.

So just what is the argument supposed to be, exactly? At the very end of his opening statement, Loftus succinctly draws it together:

“But if Yahweh was believed to accept child sacrifice, then why should I accept anything these ancient superstitious people wrote? I can’t.” (40)

I’m willing to concede that there are vestiges of tradition in the ancient Hebrew scriptures that take an affirmative position toward human sacrifice. Does it follow, as Loftus claims, that we can learn nothing from the cumulative Hebrew tradition as recorded in Scripture? Of course not. Indeed, the claim is completely ridiculous.

To see why, switch your focus from the ancient Hebrews to the ancient Greeks. Let’s take one Greek, the great Aristotle, as our example, and let’s just consider a couple of his beliefs from science, politics and ethics. To begin with, Aristotle believed that the human brain functioned to cool the blood, venting heat like the radiator in a car. Today we would consider this belief wildly false, even laughable. Second example, Aristotle also defended the use of slaves, describing them in his Politics as useful in the manner of domestic animals. This is a shockingly crude and immoral position. Does it follow that we should conclude we can learn nothing from Aristotle? Of course not. The very notion is absurd. What we do, instead, is judiciously read Aristotle, appropriating the wheat and sweeping away the chaff.

Sadly, it is common to find atheists like Loftus crudely dismissing the Hebrew tradition, even as they selectively read and appropriate the Hellenistic tradition. This is completely inconsistent and shows a deep bias against the Judeo-Christian tradition.

To make matters worse, the accepted status of the Hebrew scriptures is also irrelevant to the question of whether a person can learn from them. Imagine for the moment that Aristotle’s writings were esteemed a revealed scripture by a particular belief community. Given that this belief community accepts these texts as revelation, does it follow that you can learn nothing from Aristotle ? No, it doesn’t. By the same token, the fact that the Judeo-Christian tradition upholds ancient Hebrew writings as scripture is irrelevant to the question of whether the person who denies that status can still learn something from them.

Finally, let’s turn squarely to the question of these texts as scripture. Here I find myself compelled to return to the observation I made above that Loftus is aiming to offer a critical response to “my specific brand of theism.” To be honest, this isn’t quite correct. Rather, I find that time and again Loftus’s arguments are more specifically directed at the type of Christian theism that he held twenty years ago, a type of fundamentalism with questionable ahistoricist and inerrantist assumptions about the Bible and its nature as a Christian revelation.

In other words, Loftus is criticizing an understanding of the Bible as an ahistorical set of revealed texts without development, diversity or disagreement. His argument may have some relevance against his fundamentalist past self, but it has no relevance to the broader Judeo-Christian tradition which recognizes and embraces the complexity of that development, diversity and disagreement as part of the appropriated divine word.