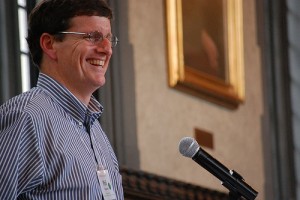 Last year while on vacation in the United States my family visited a church. As we walked into the building we were greeted by a large sign welcoming the visitor with this simple but striking message: “You are awesome.”

We walked into the church and sat down in the sanctuary. People chatted around us as we read the bulletin. Then the lights darkened as a grinning guitar player appeared on the stage and thundering music erupted from the front of the hall. After twenty minutes of a mini-concert, the band took a break and invited congregants to greet each other.

Immediately the people in the chairs around us began to chat with one another, shaking hands, hugging, and laughing. A person sitting in a chair in front of us turned around and … reached passed us to shake hands with our neighbor. Two minutes felt like an eternity as we stood there, the unacknowledged, invisible strangers. Then the lights lowered again and we were plunged back into the music. Somehow, I didn’t feel awesome anymore.

In many ways, that story captures the problem with the North American church today. We’ve focused on the surface appearance: flashing lights, loud music, charismatic speakers, and signs, songs and sermons all intended to make you feel awesome. And yet, too often the core is hollowed out, the community is a clique rather than a welcoming embrace, and the stranger remains invisible.

Twenty years ago I decided to try a Mohawk hair style for the summer. It was a fascinating experience and I noticed that people immediately treated me differently. As I walked down the street they gave me a wider path and eyed me with suspicion or trepidation. Enjoying my new found status as a social rebel, I decided to visit the little apostolic church with the vintage neon sign just a block from my apartment on Kingsway in Vancouver. As I walked into the non-descript building, no sign greeted me declaring “You are awesome.” Instead, I was met by an elderly man with a beaming smile who walked straight over and without suspicion or trepidation, gave me a hug. To be honest, I don’t remember the music or the sermon, but I do remember that welcome. 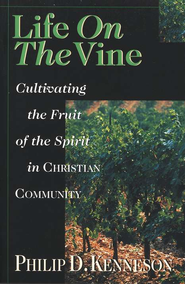 In this episode of The Tentative Apologist Podcast we sit down with Philip Kenneson to talk about the church. Dr. Kenneson is Professor of Theology and Philosophy at Milligan College, Tennessee where he has taught since 1992. He has his PhD in theology and ethics from Duke University and has published several books including Life on the Vine: Cultivating the Fruit of the Spirit and Selling Out the Church: The Dangers of Church Marketing, co-authored with James Street. Dr. Kenneson has long been committed to the renewal of the church, a commitment evident in his work with the Ekklesia Project.

Dr. Kenneson loves the church, and out of that love he speaks truth with a prophetic insight and pastoral wisdom. So join us as we consider the challenges and untapped potential of the church to be a kingdom people living in a broken world.