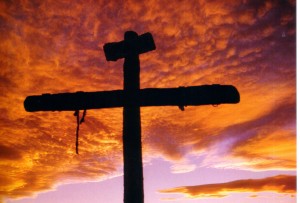 God was in Christ reconciling the world to himself (2 Corinthians 5:19). But how, exactly? This is a great question to ask as we enter another Passion Week.

In this sermon, originally delivered at Lendrum Mennonite Brethren Church in Edmonton, AB, I discuss the penal substitution theory of atonement.

According to this theory, the atonement consisted of Jesus Christ dying in the place of fallen human beings, thereby taking the punishment properly owing to us. As I note in the sermon, penal substitution theory has been very controversial. On the one hand, many Christians simply equate the gospel with this image. For these folks, the good news just is that Jesus Christ died in our place. On the other hand, others balk at this image, insisting that it presents us with a crude picture of a wrathful deity, a cosmic child abuser who demands his sacrifice, whatever the cost.

The week before I delivered this sermon I was debating the existence of God with Justin Schieber at the University of Alberta. After the debate my two friends and I followed the group out to the local watering hole for further conversation. Over the next hour, penal substitution came up — twice — as one of the reasons that led people to walk away from Christianity. Count these testimonials among those who raise the spectre of the “cosmic child abuser”.

I can already anticipate the reaction of those Christians who equate the Gospel with penal substitution: “For the message of the cross is foolishness to those who are perishing, but to us who are being saved it is the power of God.” (1 Cor. 1:18) In other words, if you don’t like the cross then there’s the door.

In short, penal substitution is a polarizing topic. So when I dealt with it in this sermon, I pursued my typical modus operandi of pursuing the golden mean. In short, I sought to recognize the serious challenges faced by this image of atonement — especially insofar as it is presented as a totalizing theory — while also recognizing that it is an important image which can still speak powerfully to us today.

Was I successful? You be the judge.