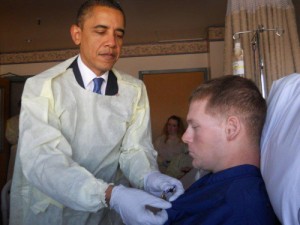 Let’s return to the brief testimony of the wounded soldier (Rory Hamill) that I recounted in “The Man I am Today: One soldier’s testimony and the problem of evil“. In the interview clip Scott Pelley noted that President Obama awarded Hamill with an honor. Hamill recalls: “He awarded me with a Purple Heart. It was amazing. It was an amazing experience.”

The Purple Heart is the oldest award that is still presented to serving members of the military and it recognizes the selfless courage and dedication of soldiers who have been killed or wounded in battle.

What is it that makes an award of this kind “amazing”?

Let’s begin with a very very trivial example. Imagine that you hold the door for somebody at the coffee shop. They walk by without acknowledging your modestly considerate act. Hrumph. That lack of acknowledgement may just be enough to put you in a foul mood.

Now imagine that as you hold the door for them they turn to you, smile, and say a heartfelt “Thank you so much!” What a difference a simple acknowledgement makes.

In this scene from “Seinfeld” George offers a tip but fails to get the recognition he desires. Things don’t go well.

Now let’s turning back from the trivial act of holding the door at the coffee shop to something really significant. Imagine that you have toiled on the battlefield, suffering untold loss, and now feeling like you are forgotten and abandoned in a military hospital. And suddenly, the President of the United States walks into your room to pin a Purple Heart on your chest, thereby acknowledging your service to all the world. Imagine as well, that this wasn’t just a momentary photo op, but that instead it represented a true honor that would be recognized by people far and wide.

That would be an amazing experience. (And when you consider how important it is, you get a sense of why soldiers get so angry about the problem of stolen valor when imposters pretend to be soldiers so as to steal some honor for themselves. (See this viral clip of a soldier confronting an imposter for stolen valor.)

And don’t miss this: the entire process of selfless service from basic training straight through to the injury on the battlefield provided the basis for the honor that you now enjoy, a recognition of your service.

When we consider the problem of evil, one of the crucial and oft overlooked factors involves the place of reward and honor. As incredible as it would be to receive honor from one’s president and nation, imagine how much greater it would be to receive honor from the creator of the universe and the hosts of heaven. Insofar as recognition and honor are things we value — and as examples from the trivial door-holding to the extraordinary service of a wounded soldier illustrate, they surely are — we should consider these factors when we seek to understand some of the reasons God might allow evil.

Interestingly, this theme of service and honor is central to that profound early Christic hymn recorded in Philippians 2:

5 In your relationships with one another, have the same mindset as Christ Jesus:

6 Who, being in very nature God,
did not consider equality with God something to be used to his own advantage;
7 rather, he made himself nothing
by taking the very nature of a servant,
being made in human likeness.
8 And being found in appearance as a man,
he humbled himself
by becoming obedient to death—
even death on a cross!

9 Therefore God exalted him to the highest place
and gave him the name that is above every name,
10 that at the name of Jesus every knee should bow,
in heaven and on earth and under the earth,
11 and every tongue acknowledge that Jesus Christ is Lord,
to the glory of God the Father.